Russia Will Always Stay True to Its Roots – Putin 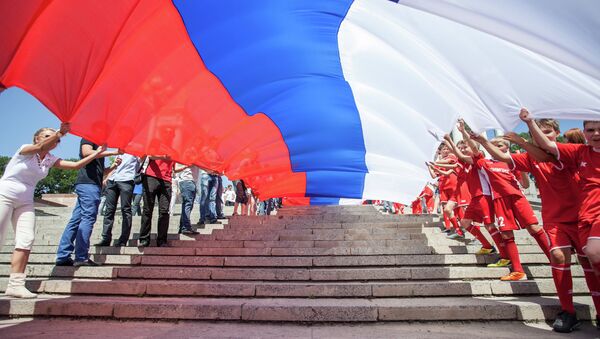 © Sputnik / Kirill Braga
/
Go to the photo bank
Subscribe
Russia has established itself as a modern, open and free country and will never be "restructured" to serve someone else’s interests, President Vladimir Putin said on Friday.

Putin Tells What it is Like to Be Him
“Not only has Russia managed to survive the trials and tribulations of the past quarter century and make a dash towards democracy and market economy, it also established itself as a modern, open and independent nation,” the president said  during the traditional ceremony of awarding State Prizes, timed for the June 12 Russia Day celebrations.

The people of the Russian Federation succeeded in preserving  the very essence of their statehood, ethnic diversity and historical unity, their tried-and-true traditions, selfless devotion to their Motherland and the ability to heroically stand up for and defend their country’s interests, freedom and independence, Putin emphasized.

“These ideals of patriotism are so deep-seated and strong that no one has ever been or will be able to re-encode Russia to fit an alien matrix. The bonds, which bind us together, forever true to our native roots and traditions, are too strong to ever be severed,” Vladimir Putin said.

“Over the past few years this country has demonstrated its ability to work as one, and if we keep doing a good job, we will certainly make it, I have no doubt about that,” Vladimir Putin added.

Addressing the winners of this year’s State Prizes for outstanding achievements in science and technology, literature and arts, Putin said: “I am sure that with people like you, people of different generations and professions, Russia will never fail.”

000000
Popular comments
We can't have patriotism in Britain, the EU hates it, along with borders and independence.