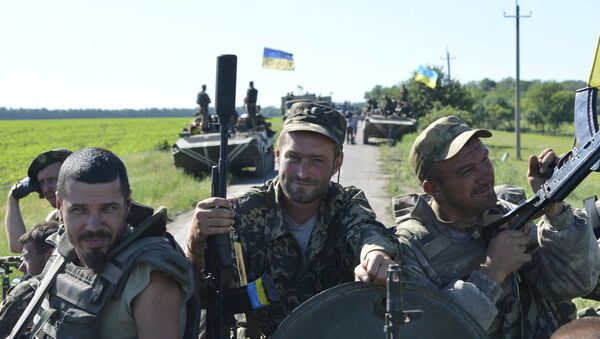 Merkel also reaffirmed Germany's stance that the civil war in the Eastern European nation could only be ended through political means. Russia has repeatedly echoed this sentiment, noting that sending lethal aid to Kiev would only worsen the Ukrainian crisis and provoke violence.

"We will find a political solution. A military solution is non-existent; I am deeply convinced of that," the German chancellor said, adding that Germany and France seek good relations with Moscow but will not accept violations of international law.

US Hawks Want to 'Drive a Stake Through the Heart of Minsk II'
The system of security built thanks to the Minsk process in eastern Ukraine remains "extremely fragile," according to Merkel. "We must do everything to secure a political resolution of the conflict," she stressed.

The Minsk II accords were signed by the Normandy quartet of France, Germany, Russia and Ukraine in February. The deal made way for a ceasefire between Kiev and the self-proclaimed republics of Lugansk and Donetsk in the country's east.

Moscow has been a champion of the peace process in Ukraine through the full implementation of the Minsk agreements.