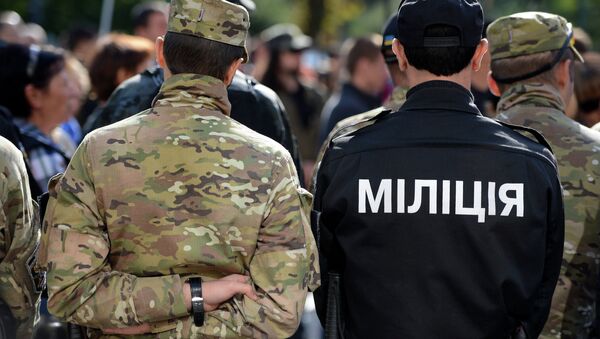 © Sputnik / Evgeny Kotenko
/
Go to the photo bank
Subscribe
At night activists attack law enforcement officers and burn tires. They discuss plans and the results of their night attacks on social media, according to the Ukrainian newspaper Vesti.

Latest Maidan Redux in Kiev Ends in Chaotic Dispersal by Masked Men
Former maidan activists who dubbed themselves as "rebels" are creating in Ukraine a new underground movement to fight against the police, the Ukrainian newspaper Vesti reported citing activists’ posts on social media.

At night "rebels" attack law enforcement officers and burn tires. They plan to continue such actions the entire summer.

Activists discuss plans and the results of their night attacks on social media, according to the newspaper.

"Here are the results of the night fighting. A police car was attacked with two Molotov cocktails on Vozdukhoflotsky Avenue. A foot patrolman was shot with fireworks near the Shulyavka subway station. We also burnt tires on the bridge near the Dorogozhichi station," Vesti cited a report by former Maidan activist Alexei from VKontakte social network.

"Within several weeks we will repeat our attacks. This time, they will be conducted across the whole city. If the revolution changed nothing, then we will stage our own revolt," Dmitry Sych, a radical activist, told Vesti.

According to the newspaper, the Kiev police said they will check the incidents and take measures to prevent any attacks.

The police also said that the incidents that "rebels" write about on social media may have not taken place actually. They may post provocative messages to destabilize the situation in the city, the police added.