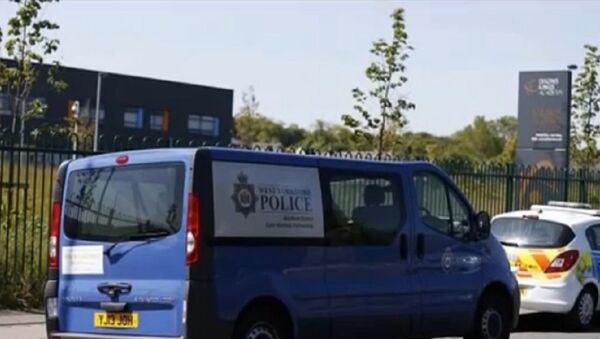 A 14-year-old school student was arrested in the British city of Bradford on Thursday on suspicion of attempting to murder his teacher during a lesson, a West Yorkshire police superintendent said.

MOSCOW (Sputnik) — He said the incident was reported to police at around 8:55 a.m. local time (7:55 GMT). Local ambulance services contacted police after a medical crew was called to attend to a 50-year-old teacher.

"We’ve just arrested a 14-year-old male in connection with this offense and he is currently in custody on suspicion of attempted murder," Detective Superintendent Simon Atkinson told reporters waiting outside the school.

The man suffered a single stab wound in the stomach, Atkinson said, adding the injury was not life-threatening, and the victim’s condition was described as "stable."

British media said the supply teacher, Nigerian-born Vincent Uzomah, was attacked after he allegedly tried to confiscate a mobile phone from the teenage boy who was playing with it during a science lesson. The attacker fled the school and was arrested at Bradford City Center in the afternoon.

Atkinson told reporters police liaison officers were working with pupils who had witnessed the stabbing incident and were obviously disturbed by what they had seen.