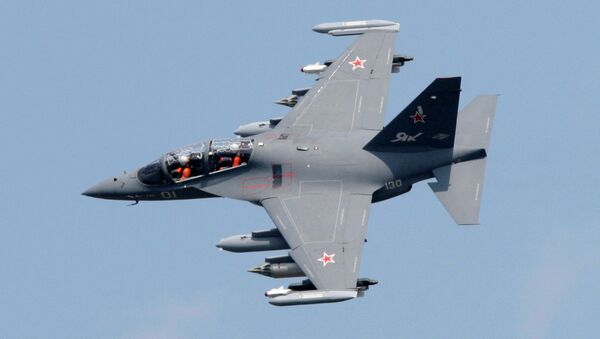 Russia
New Robotic Russian T-50 Fighter Jet Fit for Star Wars
Russia's Sukhoi T-50 PAK FA fifth-generation fighter has been stealing the show in aviation. However, Russia has another military plane that could well be an object of envy for other countries, Britain's THE WEEK reported.

The Yakovlev Yak-130 is an advanced pilot training aircraft that replicates the characteristics of 4+ generation fighters, such as the Su-30, MiG-29, Eurofighter Typhoon, Rafale, F-22, and the F-35. The plane made its maiden flight in 1996 and entered service in 2010.

The plane has a number of outstanding characteristics: its cockpit is equipped with digital indicators; it can perform flights in nearly all regimes similar to modern and projected combat planes. The construction of its air scoops and gear enable it to take off even from small grass airfields.

Ka-52 Attack Helicopter: Fly Like a Butterfly, Sting Like an Alligator
Moreover, its onboard system of combat imitation provides training in air fights, launching air-to-surface missiles with various seekers, interaction with other planes, and other options.

But what struck the THE WEEK's Thomas Newdick most is the tiny plane's loads of devastating armament and its combat characteristics.

The Yak-130 can carry up to three tons of "air-to-air missiles, air-to-surface missiles, precision-guided bombs, free-fall bombs, rockets, gun pods, and external fuel tanks." In addition to that, it can be reinforced with a 23-mm cannon, air-to-air missiles and decoy launchers.

The Yak-130 operational trainer during a demonstration flight at the 8th International air and space show MAKS-2007 in Zhukovsky near Moscow.

The Yak-130 operational trainer during a demonstration flight at the 8th International air and space show MAKS-2007 in Zhukovsky near Moscow.

In its operation radius the Yak-130 can challenge the US F-16 fighter and function as a light strike aircraft.

Choo, Choo! Russia Reviving Elusive ‘Nuke Trains' With 30 Yars ICBMs
The plane is being used in the air forces of Belarus and Libya (apart from Russia), with Asian and South American in the queue. The plane can successfully perform counter-insurgency operations such as those in Syria and Iraq, the magazine notes, adding that the Yak-130 is cost-effective and carries huge fire power.

Moscow and Rome joined efforts, and Italy manufactured trainer Aermacchi М-346, which resembles the Yak-130 but lacks the latter's repair capability. The US is considering to buy the Italian plane which may have an ironic consequence: the rival pilots of Russia and the US, learning to operate T-50s and F-35s, will be training with the same aircraft. 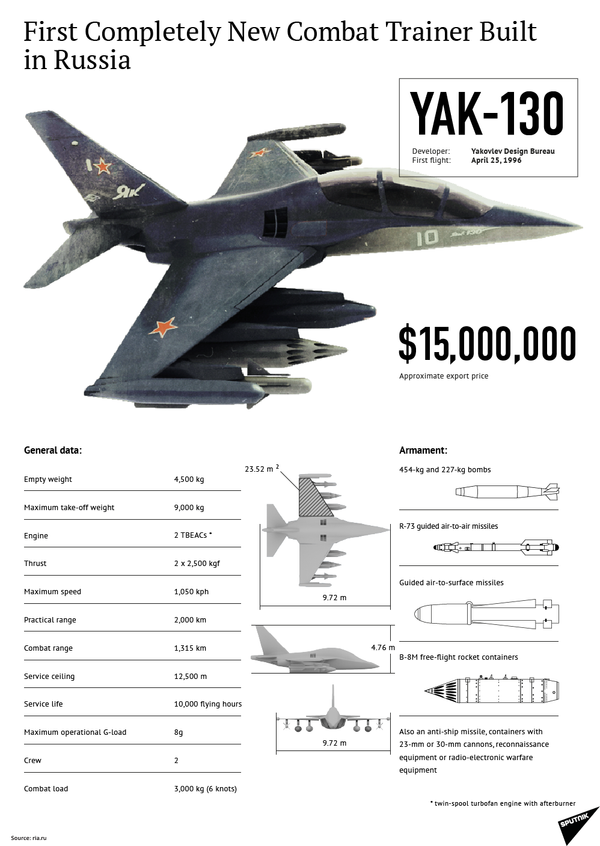