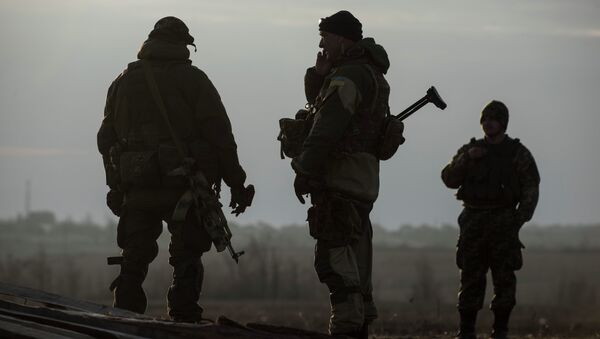 © AP Photo / Evgeniy Maloletka
Subscribe
International
India
Africa
The increased activity of both Ukrainian and Moldovan military near the border with Transnistria has the potential to destabilize regional security.

Ukrainian and Moldovan forces increased their activity near the borders of Transnistria, a breakaway region in Moldova, said President of Transnistria Yevgeny Shevchuk.

"There is a concentration of additional forces and equipment from Ukraine in close proximity to our borders, as well as intensification of training among Moldovan troops," Shevchuk said, according to his press service.

At the same time, Shevchuk stressed the peaceful nature of Transnistria's foreign policy and expressed hope that authorities in Kishinev and Kiev will understand that.

"At present we are asking ourselves whether Ukraine will remain one of the guarantors of peace, and whether it will remain an intermediary, because what is happening right now is pushing us to conclude that Ukraine is turning into a participant in the conflict, and this is a serious problem for regional security," the foreign minister of Transnistria said.

Kiev’s Blockade of Transnistria Fraught With New War
As a result, the representatives of 66 public organizations in Transnistria appealed to Russian President Vladimir Putin, asking him to protect the people of Transnistria if any external threats emerged.

Transnistrians are worried by the political situation in the region, namely by the increased activity of the Ukrainian army and NATO forces near the border with Transnistria.

"We found ourselves blocked, gripped in a vice, both from the side of Moldova and Ukraine. This is for the first time in 25 years," said Valerian Tulgara, the chairman of the Union of Moldovans of Transnistria.

Transnistria attempted to break away from Moldova amid the breakup of the USSR, while Moldova itself was declaring its independence from Moscow. The Moldovan-Transnistrian conflict has been frozen since 1992, after a failed attempt by Chisinau to solve the problem through military force, turning Transnistria into a de-facto independent state, although it formally remains unrecognized by any UN member states.