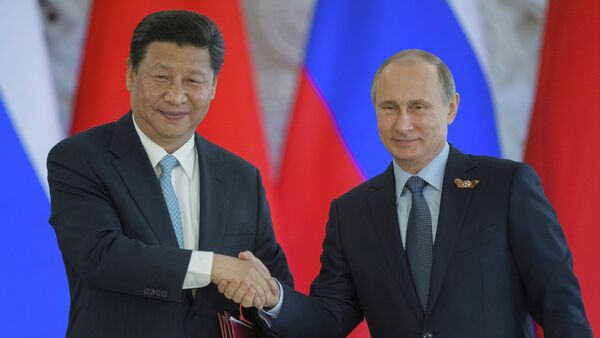 Russia has been shifting its strategic pivot from the West to the East, beefing up its presence in Asia and increasing Indo-Pacific trade and security; furthermore, Moscow is expected to become a big player in Asian energy markets.

While NATO member states are beating the war drums over Russia's phantom menace to the West, hunting for "little green men" or imaginary Russian submarines prowling EU territorial waters, the Kremlin has been recently shifting its strategic pivot to the East, boosting relations with fast emerging Asian powers.

"Whereas Moscow's strategic posture has long stressed the need to look east, it has now begun increasing its Indo-Pacific trade and security footprint, including in Southeast Asia, in order to give its intended policy substance," stressed Matthew Sussex, Director of the Politics and International Relations program at the University of Tasmania.

US Dragging Europe Into 'Crusade' Against Russia – Former French PM Fillon
Moreover, "Russia is betting that the 21st century will be an Asian one — and it is betting on China as the main driver of change in regional and global order," the expert added.

Mr. Sussex called attention to the fact that Moscow's new pivot to Asia has already prompted a large-scale modernization of Russia's Pacific Fleet. Indeed, it seems that the fleet will become one of Russia's biggest assets in the next decade, the expert noted.

Russian PM Thankful Sanctions Pushed Moscow to Focus on Work With Asia
"The recent Chinese-Russian naval exercises in the Mediterranean, for instance, were partly symbolic. But they would have been unthinkable even a few years ago. Just as unthinkable, in fact, as Chinese troops marching in Red Square, which occurred at the May [9] Victory Day celebrations in Moscow," Mr. Sussex emphasized.

On the other hand, Russia has already established strong security ties with India. The expert pointed out that about 70 percent of New Delhi's heavy weaponry is made in Russia.

G7 Prompts Russia to Create New World Order Via BRICS, SCO - Lawmaker
Moscow has also forged a "comprehensive strategic partnership" with Vietnam, including the possibility to refuel its aircraft in the Western Pacific and simplified procedures for visits by Russian vessels. Hanoi has also inked a free trade agreement with the Russia-led Eurasian Union.

Mr. Sussex added that the Kremlin is also conducting negotiations with post-coup Thailand regarding deals for rail services, military aircraft, and tanks. Another potential consumer for Russia is Indonesia: the Asian country is currently considering purchases of Sukhoi jets, amphibious vehicles and helicopters, according to the expert.

At the same time, Russia is poised to meet almost 100 percent of Asia's energy demand by 2025, through its development of the Far East, he stressed.

US to Lose Its Ground Under BRICS Pressure
It is expected that after 2018 Beijing will be importing more Russian gas than Germany is importing today. Russia's new Turkish Stream is meant to transfer almost 6.5 million tons of gas per year into the European Union through Greece "with the capacity to re-route to India and Asia." Indeed, Moscow and New Delhi are now considering both an oil and a gas pipeline.

"Russia is also diversifying to a more balanced mix between pipelines and LNG, so that it will be looking to compete directly with Australia. An example is its LNG plant on Sakhalin Island, which will be handling 5 million tons annually from 2018," Mr. Sussex highlighted.

Russia's Rosatom is also beefing up its presence in Asia: it has concluded a deal to build about 20 nuclear reactors in India, costing about $43 billion.

The West has been considering Russia an "invisible actor" in Asia for a long time now. And that was true, given Russia's weakness after the collapse of the Soviet Union.

"But now that posture is looking less viable, especially since Putin has made his Asian tilt Russia's 'national priority' of the 21st century," the expert remarked.

And it seems that both Australia and other Western powers which long have considered Asia their own "playground" will have to put up with the new reality.