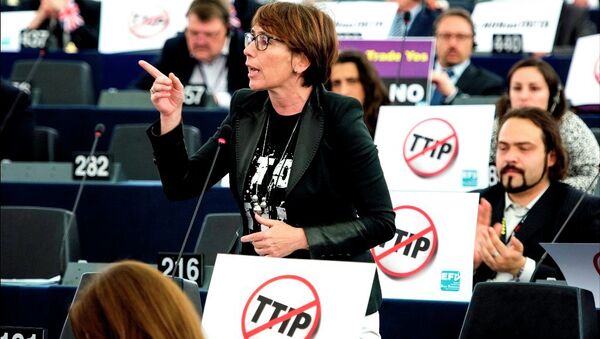 Proponents of the controversial Transatlantic Trade and Investment Partnership (TTIP) have suffered another blow in their attempts to have the deal finalized by the end of the year, with European Parliament descending into chaos as MEPs protested against further delays on a crucial vote and debate.

The rebellious scenes, triggered by British UKIP MEP Stephen Woolfe, saw MEPs take to their feet to boo, shout and clap in protest against a delay in proceedings which would have seen members of parliament vote and share their opinions on the highly divisive trade deal.

This pic sums up today's charade on #TTIP! Who can give funny caption? @paulnuttallukip @Nigel_Farage @JonathanArnott pic.twitter.com/obinr9BtKJ

A number of MEPs also took to the front of the stage to question parliament officials.

The great #TTIP debate that never was — what happened in #Strasbourg http://t.co/HB8DE9paRm Blog by @nickdearden75 pic.twitter.com/FkELIKK8n2

While the proposed TTIP is backed by the US government, business figures and some conservative politicians in Europe, who hope to finalize a deal before the end of 2015, the agreement has drawn criticism and opposition from both the left and right of European politics, with concerns the deal may undermine EU health, safety and environmental regulations, with critics arguing that it will also give multinational corporations unprecedented legal power over governments in some areas.

These fears have triggered widespread opposition across Europe at grassroots level, with numerous demonstrations taking place in protest against the proposals, particularly given the secretive nature of negotiations between those governments involved.

A campaign labeled 'Stop TTIP' has also gathered significant public support with more than two million people signing up to the petition to prevent TTIP from being finalized.

The high-profile public opposition to the proposals, which was reflected in the European Parliament's decision to scrap this week's debate and vote on the matter, was a sign that the EU were "running scared" over the strength of opposition to the deal, UKIP MEP Nigel Farage said.

Significantly Farage's comments gathered support from those who are normally opposed to his policies, with Greens MEP Keith Taylor echoing the former UKIP leader's sentiments.

"The decision to postpone the votes and debate on TTIP stinks of political parties in the European Parliament running scared of the huge public opposition to TTIP.

"TTIP represents a monumental power grab by corporations and it must be stopped in its tracks."

Trade union officials have also been among those highly critical of the proposals, with Dave Prentis, general secretary of British public services union UNISON telling Sputnik that the UK and Europe will be "held to ransom by foreign companies" unless public services are excluded from TTIP proposals.

A Blow to Sealing the Deal?

The vocal opposition to such proposals, from both members of the general public and European politicians has led many to question whether a deal will be agreed upon, especially before the end of 2015, which has been mooted as the preferred deadline of the Obama administration.

British Prime Minister David Cameron sought to appease TTIP critics, saying that many of the concerns about giving power to large multinationals were based on "false fears" with the PM claiming that the world economy was losing $970 million (£630 million) for every day that the TTIP deal was delayed.

Despite the redoubled efforts by some politicians to secure a deal, activists believe they have succeeded in delaying a decision on TTIP.

"We do not think that it is very likely that TTIP negotiations will be concluded at the end of 2015. As insider reports reveal, there are still a lot of points open in the negotiations between the US and the EU," Anne Daenner, spokesperson from activist group 'More Democracy' told Sputnik.

"It is very likely that the ongoing protests have also influenced the decision of the European Parliament to postpone the debate and resolution on TTIP."