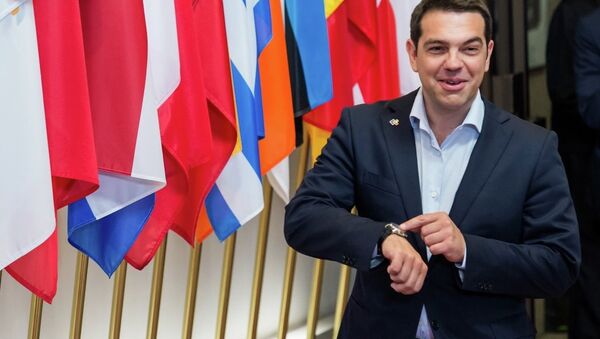 Greece has rejected demands from Brussels to cut pensions and reform its labour market in return for a bailout leaving the country at risk of leaving the European block.

Athens has postponed paying a $338 million (€300mm) payment to the International Monetary Fund (IMF) — chancing instead to bundle it into a single $1.8 billion (€1.6bn) payment due at the end of June. If Greece defaults on its payment to the IMF, it could become the first European country to default on the IMF, putting it in the same league with Zimbabwe and Argentina.

And the risk of joining that exclusive club is rising by the day. During a speech in London, Jens Weidman, President of Germany's Budesbank said:

"There is a strong determination to help Greece but time is running out, and the risk of insolvency is increasing by the day."

Opening the gates for an ever more likely Grexit from the Eurozone — Weidmann said "the main losers in that scenario would be Greece and the Greek people."

Harry Colvin, director and senior economist at Longview Economics told Sputnik that the lack of agreement is putting pressure on European asset prices. However, Colvin doesn't think a Grexit is coming any time soon, saying that it's "not likely in our view."

"There's plenty of political capital invested in the European project and a strong desire not to create a precedent for the 'irresponsibility' of EU membership — not least because of the fiscal irresponsibility/moral hazard that may create."

"On top of that — Greece has a current account surplus and a primary fiscal surplus and the economy is starting to grow again, so it's close to achieving workable debt dynamics."

Achievable or not, Athens is yet to agree on a deal to unlock the funding from international lenders to prevent defaulting on its debt.

And in response to the prospect of Tsipras signing up to more imposed austerity measures, a small group of activists from the pro-communist PAME trade union occupied the finance ministry, removing the EU flag and unfurling a banner saying:

"We have bled enough, we have paid enough."