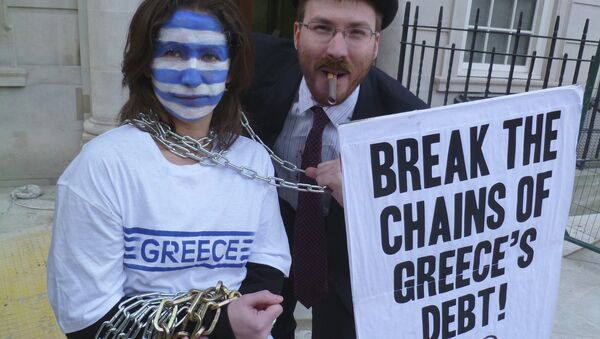 Russia could help Greece avoid defaulting on its foreign debt obligations and exiting the euro zone if the EU gave a nod to the Moscow-proposed Turkish Stream gas pipeline project, French media said on Wednesday.

“Greece could serve as a base for Russian gas deliveries to Europe if, of course, the European Union gives the much-needed go-ahead to the Turkish Stream project… Greece apparently counts on a 5 billion euro advance from Russia if it agrees to become a transit center for Russian gas shipments to Europe,” Isabelle Chaboud wrote in the latest edition of the French daily financial newspaper Les Echos.

The financially-strapped Greece has until the end of this month to line up 1.6 billion euros in foreign debt payments, and the author believes that Russia’s backing could help it avoid a default and an exit from the euro zone.

Tsipras is due to attend the International Economic Forum in St. Petersburg on June 18-20 where he will meet with the Russian president to discuss a range of bilateral issues, including the construction of a pipeline section to bring Russian natural gas to Greece and beyond.

Russia has been promoting the Turkish Stream pipeline project to pump gas across the Black Sea to Turkey and Greece since last December.