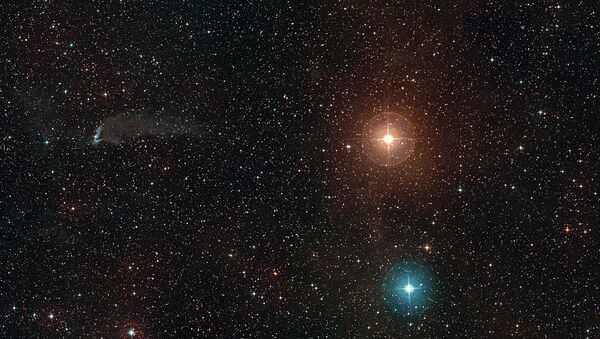 © ESO/Digitized Sky Survey 2
Subscribe
New images from an observatory in Chile reveal the birth of a stunning butterfly-shaped nebula formed out of the dust of a dying star and its companion 200 light years from Earth.

The nebula centers on a red giant star called L2 Puppis. The red giant is dying and around it is a disk of dust that spans some 550 million miles (900 million kilometers). The butterfly shape is formed as cones of dust expand outward perpendicularly from either side of the disk formation. 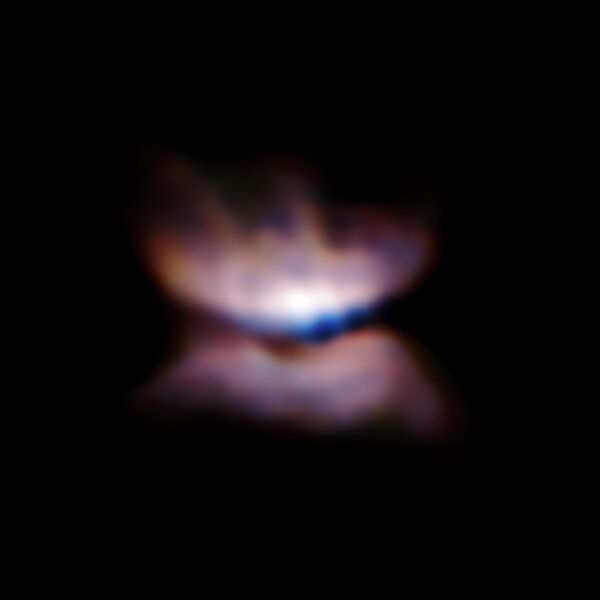 The new images of L2 Puppis show how the disk of material around the dying red star at its core is swept up into "butterfly wing" cones on either side by interactions with its companion star.
© European Southern Observatory

The images, which were captured by the European Southern Observatory's Very Large Telescope, show that those outward plumes are being formed by the movements of a companion star — a younger red giant star — orbiting L2 Puppis once every few years.

Researchers also created a video that zooms through the images:

This type of formation is what scientists would expect to create the complex, hourglass figure of a bipolar planetary nebula, the origin of which researchers still know relatively little about. (The nebula doesn't actually involve any planets, the name is a holdover from earlier times when the roundness of the formation appeared planet-like to observers.)

"The origin of bipolar planetary nebulae is one of the great classic problems of modern astrophysics, especially the question of how, exactly, stars return their valuable payload of metals back into space — an important process, because it is this material that will be used to produce later generations of planetary systems," study lead author Pierre Kervella, of Unidad Mixta Internacional Franco-Chilena de Astronomía in France, said in a statement.

"With the companion star orbiting L2 Puppis only every few years, we expect to see how the companion star shapes the red giant's disk. It will be possible to follow the evolution of the dust features around the star in real time — an extremely rare and exciting prospect."

Normally, this kind of formation would be difficult to observe, as the nearby star would outshine the details of the nebula. But the ESO's Very Large Telescope was aided by its SPHERE instrument. The instrument's ZIMPOL mode enhances those otherwise too faint details, and these are first published images using this mode, and the most detailed of a star in this state.

In addition to the action of the companion star, which creates the cone-shaped plumes, scientists also observed plumes of material inside the cones which they believe are formed by the interactions of the stars' stellar winds and radiation.

Scientists have long puzzled over the origins of bipolar planetary nebula and some of their strange features. For example, NASA scientists discovered that many of these nebulae are all similarly aligned within our galaxy.

"This really is a surprising find and, if it holds true, a very important one," Bryan Rees, of the University of Manchester in the United Kingdom, said in a statement when the researchers he led discovered the pattern using NASA's Hubble Space Telescope and the European Southern Observatory's New Technology Telescope (NTT). 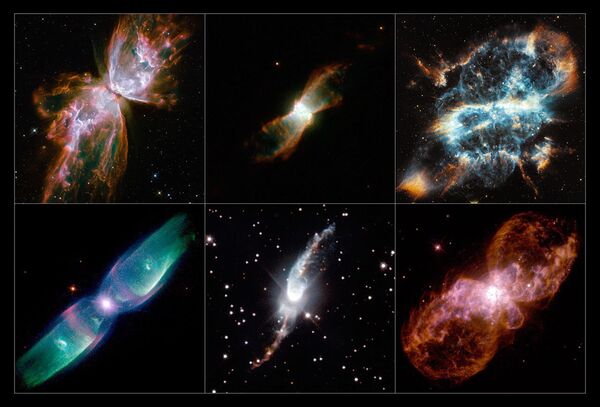 "Many of these ghostly butterflies appear to have their long axes aligned along the plane of our galaxy. By using images from both Hubble and the NTT we could get a really good view of these objects, so we could study them in great detail."

The researchers studied 130 nebulae throughout the central bulge in the Milky Way galaxy and found that, while most were pretty randomly aligned, binary planetary nebulae were different, in that they were the same.

"The alignment we're seeing for these bipolar nebulae indicates something bizarre about star systems within the central bulge," Rees said. "For them to line up in the way we see, the star systems that formed these nebulae would have to be rotating perpendicular to the interstellar clouds from which they formed, which is very strange."

000000
Popular comments
you can pray to any deity you like, you can pray to the god of atheism if you like, you chose, you can think this through, hard, but one thing will never change: the finality of this Univers's existence. the electric Universe is for dum people. there are supreme laws of nature, of creation, of reality, you chose. one is: anything that is born, must die! God will never change this mind of His, the mind of the end of all. you can be delusional and search for anything that promises you infinite life for that or that or another silly that. you can call that true faith, you can call that science, anything you like. you'd just fail to grasp things. the finite character for any term is immutable. and your life in this existence is not to allow you to formulate any viable alternative. well, you can do it anyway, but you will always be wrong.
innocappuccinno
25 March 2016, 23:11 GMT
000000
Newsfeed
0
New firstOld first
loader
LIVE
Заголовок открываемого материала
Access to the chat has been blocked for violating the rules . You will be able to participate again through:∞. If you do not agree with the blocking, please use the feedback form
The discussion is closed. You can participate in the discussion within 24 hours after the publication of the article.
To participate in the discussion
log in or register
loader
Chats
Заголовок открываемого материала
Worldwide
InternationalEnglishEnglishMundoEspañolSpanish
Europe
DeutschlandDeutschGermanFranceFrançaisFrenchΕλλάδαΕλληνικάGreekItaliaItalianoItalianČeská republikaČeštinaCzechPolskaPolskiPolishСрбиjаСрпскиSerbianLatvijaLatviešuLatvianLietuvaLietuviųLithuanianMoldovaMoldoveneascăMoldavianБеларусьБеларускiBelarusian
Transcaucasia
ԱրմենիաՀայերենArmenianАҧсныАҧсышәалаAbkhazХуссар ИрыстонИронауОssetianსაქართველოქართულიGeorgianAzərbaycanАzərbaycancaAzerbaijani
Middle East
Sputnik عربيArabicArabicTürkiyeTürkçeTurkishSputnik ایرانPersianPersianSputnik افغانستانDariDari
Central Asia
ҚазақстанҚазақ тіліKazakhКыргызстанКыргызчаKyrgyzOʻzbekistonЎзбекчаUzbekТоҷикистонТоҷикӣTajik
East & Southeast Asia
Việt NamTiếng ViệtVietnamese日本日本語Japanese俄罗斯卫星通讯社中文（简体）Chinese (simplified)俄罗斯卫星通讯社中文（繁体）Chinese (traditional)
South America
BrasilPortuguêsPortuguese
NewsfeedBreaking
13:06 GMTRussian Prosecutors Declare Scientologists' Activities Undesirable in Country
13:04 GMTSoviet-Made Howitzer Capable of Firing Nuclear Projectiles Reportedly Spotted in Africa
13:01 GMTGerman Expert Suggests Post-Merkel Governments Will Lack Stability
12:36 GMTLittle Mansion That Could: House on La Palma Miraculously Survives Devastating Volcanic Eruption
12:32 GMTFight for Heavyweight Championship Title: Usyk vs Joshua Weigh-In
12:27 GMTREC Surveys Exporters’ Wishes for ‘Single Window’ Development
12:21 GMTNew Huge Space Cavity of Unknown Origin May Explain How Stars Are Born, Scientists Suggest
12:11 GMTTaliban Still Waiting for US Response on Unfreezing Afghan Assets, Deputy Minister Says
12:02 GMTPowerful 6.1-Magnitude Earthquake Hits Adak, Alaska
11:50 GMTTexas Sec of State's Office Announces 'Full Forensic Audit' of 2020 Election in Four Counties
11:49 GMT'Georgina is a Great Support to Cristiano': Ronaldo's Mom Denies Rift With His Girlfriend
11:40 GMTCongress is a Sinking Ship, Says BJP-Allied Nishad Party Chief in Poll-Bound India's Uttar Pradesh
11:33 GMTFinal Countdown: Who's Leading in Polls Ahead of German Federal Elections?
11:27 GMTMexican Authorities Block Haitian Migrants From Crossing Into US, Seal Off Makeshift Camp
11:26 GMTErdogan Expects Russia to Change Approach to Syria
11:14 GMTIndia's Top Investigative Agency to Probe Influential Monk's Mysterious Death
11:13 GMTSabina Nessa: Police Ask For Help in Identifying Man After Teacher Murdered in London Park
11:11 GMTUK Ministry of Defence Confirms Second Afghan Data Breach, Vows to Prevent New Ones… Again
11:06 GMTKim Jong-un's Sister Responds to Seoul's Proposal to Officially End the Korean War
11:01 GMT'Actors Started Taking Liberties With Me': Actress Mallika Sherawat Recalls Facing Casting Couch