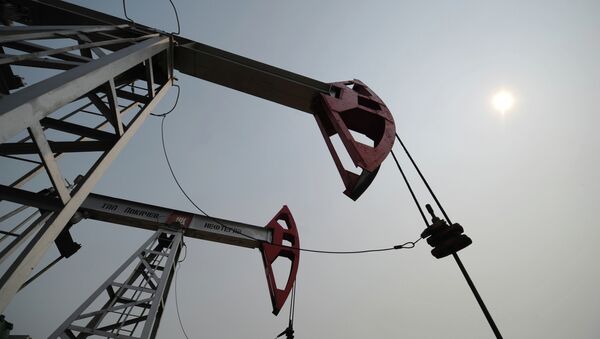 The United States could compete with Russia for European and Asian oil markets, if the US oil export ban is lifted, French geopolitician and financier Arnaud Leclercq told Sputnik in an interview.

MOSCOW (Sputnik), Yulia Shamporova – The US oil industry has been actively lobbying to lift the 40-year-old ban on exporting US crude oil, introduced in response to the OPEC oil crisis, for many years.

“There is a debate in the US and a strong lobby pushing the situation into the direction of lifting the oil export ban, and starting to export oil…. Where the USA can export oil? To the Asian market: Japan, Korea, China and Europe. The consequence of that is if the ban is lifted there is a competition of two suppliers, the US and Russia,” Leclercq said.

Gazprom Sees No Rivals in European Gas-Pipeline Projects
The financier underlined that in the short term sanctions are a purely political move, a reaction to the situation in Ukraine, but, in the long-term the United States could use sanctions to compete with Russia for oil markets.

“In the longer term, you never know. That would make sense. And you should not blame the USA for that, it’s very pragmatic,” Leclercq said.

In 2014, the United States, the European Union and some of their allies imposed economic sanctions on Moscow over its alleged meddling in the conflict in Ukraine’s southeast. Restrictions targeted energy, defense and banking industries. Additional curbs specifically targeted the Russian petrochemical industry.

Russia has repeatedly denied the allegations, and retaliated by introducing a year-long embargo on food imports from countries that imposed sanctions against it.