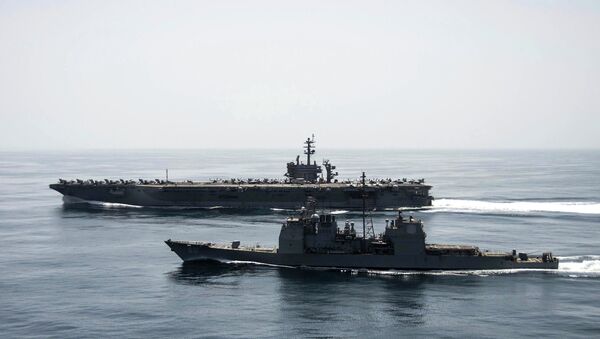 The Navy plans to pull its aircraft carriers out of the Middle East temporarily this fall, leaving US Central Command, which is leading the fight against the self-proclaimed Islamic State terror group, without its main airstrike platform.

If finalized, the plans will put the United States without a carrier presence for one to two months after the USS Theodore Roosevelt and its strike group leaves the Middle East this fall. The USS Harry Truman and its escorts will take the Roosevelt's place this winter, anonymous Navy officials told NavyTimes.

Until the Truman arrives, CentCom will rely on airbases in the region, as well as other Navy assets – none of which have the same capabilities as an aircraft carrier and its accompanying strike group though, as VICE News pointed out.

The Navy, however, is downplaying the potential impact.

The gap in carrier presence would show that the Navy is making good on its pledge to cut back on long-term deployments, which in the past have stretched to six or eight months and even beyond 10 months.

Such marathon deployments are poor for sailor morale and hasten the wear and tear of the Navy's ships.

There are currently 10 aircraft carriers in the Navy's fleet. But because of multiple factors, including ongoing maintenance, Marks pointed out, the Navy is unable to keep a continuous carrier presence in every place where it has a military engagement, especially since the country is getting involved in more and more operations.

Still, the lapse in carrier presence in the Persian Gulf has not been finalized, and the USS Roosevelt could remain there if CentCom makes such a request and Defense Secretary Ashton Carter approves it.