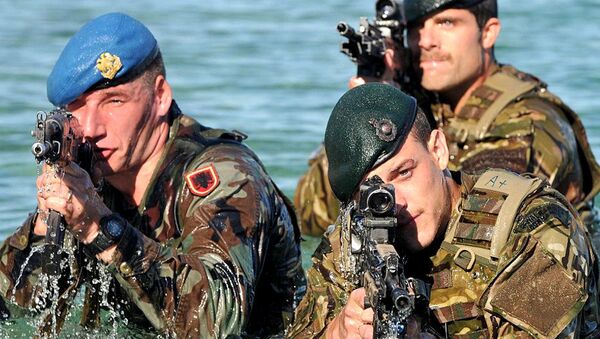 According to polling carried out by Pew Research, the populations of NATO countries, particularly in Western Europe, would not support the use of force to defend another member of the alliance.

On the Hook: Soros' Adventurism in Ukraine to Cost US Taxpayers Dearly
MOSCOW (Sputnik) —NATO's key founding principle of collective defense is not shared by the majority of its residents, according to polling conducted by the Pew Research Center.

Article 5 of the North Atlantic Treaty, signed in 1949, states that an armed attack against one member state "shall be considered an attack against them all," and that consequently the members agree to "assist the Party or Parties so attacked by … such action as it deems necessary, including the use of armed force."

NATO Launches Poland Drills for New ‘Very High Readiness' Joint Task Force
The principle, which has been the cornerstone of NATO since its inception, is described by the organization as being "at the very heart of NATO’s founding treaty," and "a unique and enduring principle that binds its members together, committing them to protect each other and setting a spirit of solidarity within the Alliance."

However, according to the polling, a minority of the population share this view, particularly in Western Europe. The Pew poll was conducted through telephone and face-to-face interviews of more than 11,000 people in Russia, Ukraine and eight NATO member states: the United States, Canada, France, Germany, Italy, Poland, Spain and the United Kingdom.

When asked a question about the perceived military threat posed by Russia, "If Russia got into a serious military conflict with one of its neighboring countries that is our NATO ally, do you think our country should or should not use military force to defend that country?" a majority [more than 50 percent] of respondents responded affirmatively only in the US and Canada.

Support for the principle was weakest in Germany, where 58 percent of those polled replied that in such a scenario Germany should not become involved in military conflict. In France, 53 percent, and in Italy, 51 percent said that their countries should not use military force in that case; the median level of support for the collective defense principle in the eight countries was 42 percent.

Many NATO countries reluctant to use force to defend allies against Russia http://t.co/Ejmo2O7ZPm pic.twitter.com/Aq2OmGFlEB

When asked if they were in favor of NATO sending arms to Ukraine, respondents were also unsupportive. Only in Poland did support for the idea reach 50 percent; Poles were also the most supportive of the idea of Ukraine joining the EU and/or NATO.

Of the other nations polled, support for sending arms to Ukraine was highest in the US and Canada, but nevertheless those in favor represented a minority of those polled; 46 percent in the US and 44 percent in Canada. Support for the idea of sending military supplies was lowest in Germany, with 19 percent, followed by Italy [22 percent] and Spain [25 percent]. The median was 41 percent.

Since Kiev began a military operation to suppress independence supporters in eastern Ukraine in April 2014, it has repeatedly appealed to Western states for lethal aid.

On May 15, US Congress passed a defense budget bill that will allocate $300 million in lethal defensive weapons to Ukrainian government forces. US President Barack Obama has been reluctant to provide such assistance to Kiev.

A number of European countries, including France, Germany, Norway and Denmark ruled out arming Kiev, stressing the need to find a political solution to the internal Ukrainian conflict.

On the question of Ukraine joining the European Union, which provided the catalyst for last year's Euromaidan coup d'état, the residents of EU member states are especially divided; though a majority in Poland [60 percent], Spain [65 percent] and the UK [53 percent] support Ukraine joining the EU, the idea is only supported by a minority in Germany [41 percent], France [46 percent], and Italy [37 percent].