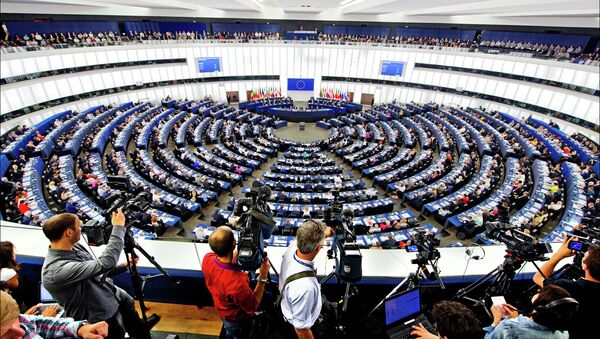 © Flickr / European Parliament
Subscribe
The West imposed anti-Russian economic sanctions and restrictions on certain individuals in 2014, after the Black Sea peninsula of Crimea broke away from Ukraine and rejoined Russia, following a referendum.

“There are very few cases when sanctions really changed the governments or political situations in the countries. Cuba is a good example, the sanctions took place [over] so many years, and they didn’t change anything at all”, Leclercq said.

Speaking at the G7 summit on Monday, US President Barack Obama said sanctions against Russia could be expanded if the Ukrainian government and independence supporters fail to reconcile.

The sanctions, imposed by the United States, the European Union and some of their allies, targeted three key spheres of the Russian economy – energy, defense and banking.

Russia has repeatedly refuted the allegations, and retaliated by introducing a year-long embargo on food imports from countries that imposed sanctions against it. Top Russian officials have also branded the sanctions inefficient, arguing that they do more harm to European economies than to Moscow.