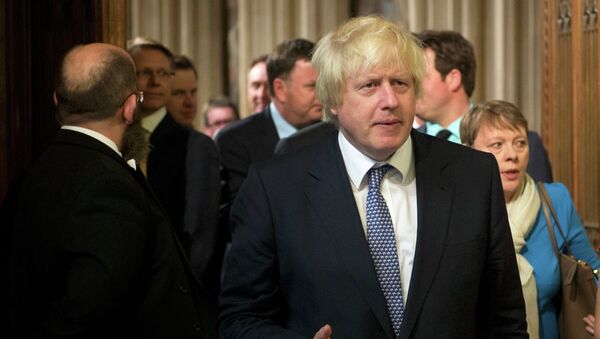 London Mayor Boris Johnson urged UK Prime Minister David Cameron on Tuesday to allow Conservative ministers to retain their place in government even if they plan to publicly support a British exit from the European Union in the upcoming referendum.

EU Membership Referendum May Negatively Affect UK Credit Rating – Moody's
MOSCOW (Sputnik) – On Sunday, Cameron said he had warned his ministers that they would be forced to resign if they wanted to vote for Britain to leave the European Union. However, on Monday, the prime minister claimed his words were misinterpreted, adding that he was referring to the renegotiation process on UK relations with the bloc.

"I don't see why not [allow ministers to campaign]. It would be safer and more harmonious to say 'make your own minds up,'" Johnson said during his weekly Leading Britain's Conversation (LBC) radio show.

He cited a 1975 UK referendum to assess public support for UK membership of the European Economic Community, currently integrated into the European Union, as a good example of when ministers were free to vote according to their conscience.

On Tuesday, the UK parliament is debating the issue of a referendum on UK membership of the European Union that, Cameron pledged, will take place before the end of 2017.

Before winning the May 7 general election, the UK prime minister vowed to hold a referendum on the country's EU membership and revise Britain's relations with the union, should his party emerge victorious.