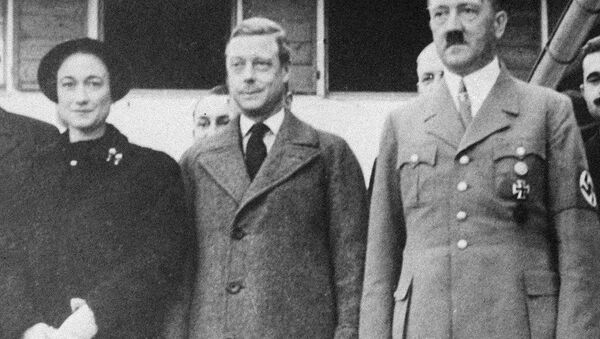 The UK's King Edward VIII, who later became the Duke of Windsor after abdicating in 1936, called for an Anglo-German alliance in the lead-up to WW2, and argued that bombing England could have brought about peace by ending the war, historical documents have revealed.

Although war-era letters between members of the Royal family and their German relatives remain confidential thanks to the Royal Archives, information acquired through the open archives of 30 countries including Germany, Spain and Russia has shed light on the close relationship many figures of Europe's aristocracy had with the Nazis.

Dr Karina Urbach, senior research fellow at the Institute of Historical Research at the School of Advance Study at the University of London, has uncovered how the Duke of Windsor blamed "the Jews, the Reds and the Foreign Office for the war," during a conversation with his friend and Spanish diplomat Don Javier Bermejillo.

According to the documents, the Duke, who was forced to abdicate as King in 1936, after proposing to divorced American woman Wallis Simpson, held great disdain for the UK's political establishment, reportedly telling Bermejillo that he would like to put former British Prime Minister Anthony Eden and other politicians "up against a wall."

However, more explosive revelations came about during a separate conversation between the two on June 25, 1940, with Bermejillo reporting that Windsor argued that the bombing of England could help bring peace as it would end the war.

Writing for 'The Conversation', Dr Urbach noted how, according to Spanish documents, the "Duke of Windsor seemed very much to hope that this would occur," with Bermejillo relaying the message to his superiors that the Duke "wants peace at any price."

The report of the conversation was passed to Spanish dictator Francisco Franco, and subsequently forwarded onto Hitler, who ordered the bombing of Britain on July 10, 1940.

Further details of the Duke's connection to the Nazis, for whom he has long been identified as a sympathizer, have also been uncovered through archives, which have revealed the close relationship between Windsor and his relative, the German Duke of Coburg.

Dr Urbach writes that "Coburg was part of a wider group of go-betweens — private individuals who were used for secret negotiations by Hitler," further revealing the network of privileged Europeans who were sympathetic to the Nazi cause.

The Duke of Coburg, who had helped hide some of Hitler's supporters following the failed Putsch of 1923 was later used by the Nazis for secret diplomatic missions to the UK, Italy, Hungary and Sweden throughout the 1930s, where he was subsequently welcomed by the British Royal family during visits.

In particular, the documents reveal how both Duke of Windsor and his German relative seemed to share similar points of view when it came to dividing power across Europe.

"It was only by turning to intelligence reports and foreign archives that I was able to piece together that the Duke of Coburg and the Duke of Windsor dreamt of an Anglo-German alliance. Windsor helped Coburg towards this goal on several different occasions," Dr Urbach wrote.

So close was the connection between the two, Dr Urbach said that Soviet intelligence services were "convinced" of the Duke's treachery, reporting in 1940 that Windsor was "conducting negotiations with Hitler to form a new English government and conclude a peace with Germany contingent on a military alliance against the USSR."