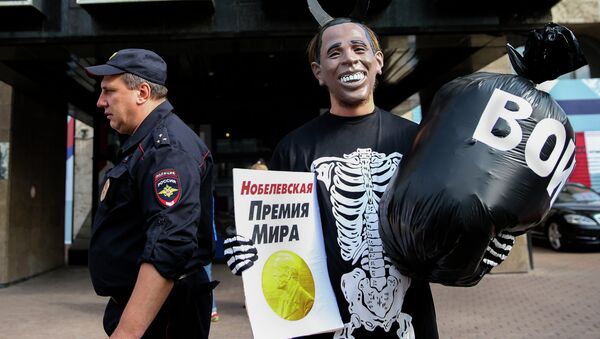 © AP Photo / Pavel Golovkin
Subscribe
US President Barack Obama has lost all credibility because of his dangerous policies of nuclear escalation towards Russia, Dr. Helen Caldicott, founder of the Nobel Peace Prize-winning International Physicians for the Prevention of Nuclear War (IPPNW), told Sputnik.

WASHINGTON (Sputnik) — Obama was awarded the 2009 Nobel Peace Prize despite public criticisms at the time that he had yet to show any accomplishment worthy of earning it.

“To me Obama has lost total credibility,” Caldicott said on Monday.

“Obama is setting up the Russians to be provoked, which is quite extraordinary.”

The peace activist was commenting on what she regarded as an alarming of tension between the United States and Russia over the Ukraine conflict.

Her comments came after media reports that, at the Group of Seven (G7) meeting in Krun, Germany on Sunday, President Obama had discussed with British Prime Minister David Cameron the possible deployment of new US cruise missiles in the United Kingdom allegedly to deter Russia.

“What on Earth Obama thinks he’s doing, God only knows.”

The anti-nuclear campaigner noted that military exercises are regularly conducted in the Baltics by the United States and its allies as well as by Russia.

“We are dangerously close to having a world war start, even accidentally.”

Caldicott also said she feared the growing US and NATO moves to pressure Russia reflected an irrational recklessness that could escalate into a serious crisis.

“This is above and beyond all else a public health issue. How do these people think they have the right to threaten all life on the planet?”

IPPNW under Caldicott’s leadership was awarded the 1985 Nobel Peace Prize.

Obama said at the time he was surprised and deeply humbled to receive the Nobel peace prize. 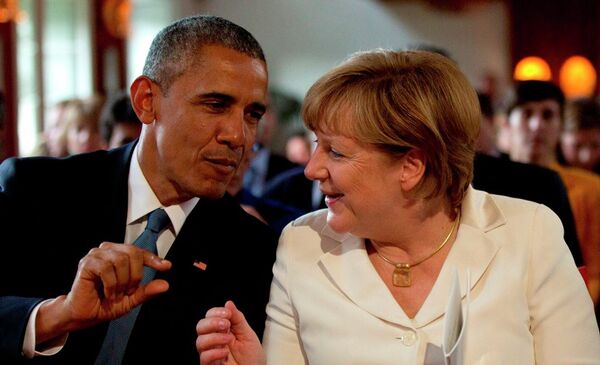 German Chancellor Angela Merkel, right, speaks with US President Barack Obama during the G-7 summit
© AP Photo
000000
Popular comments
I don't believe Obomba had any credibility to start with. It's a chaotic murdering clique of puppets and fools addicted to bank accounts. No morals.
Magenta61
9 June 2015, 07:57 GMT
000000
There is no honor between thieves, cheaters, and not telling the truth. As I observe contrary to Mr. Obama, Mr. Putin hardly ever uses "paper" to read from. That is quiet a simple answer. If you are steadily not telling the truth, you not all these "nonsense" talk on paper. Mr. Putin is talking straight, how it is, etc. You notice that when he speaks or answers questions. Never reading from paper. That is what makes him so strong. The peoples observe this when he speaks and make their own judgements accordingly. If you tell how it is, you never have to read things from paper. When reading from paper is being used it is during an big event, like now in St. Petersburg. But again, afterwards, he is answering questions from journalists without paper. The man is simply good.
dewatergeus
23 June 2015, 02:20 GMT
000000
Newsfeed
0
New firstOld first
loader
LIVE
Заголовок открываемого материала
Access to the chat has been blocked for violating the rules . You will be able to participate again through:∞. If you do not agree with the blocking, please use the feedback form
The discussion is closed. You can participate in the discussion within 24 hours after the publication of the article.
To participate in the discussion
log in or register
loader
Chats
Заголовок открываемого материала
Worldwide
InternationalEnglishEnglishMundoEspañolSpanish
Europe
DeutschlandDeutschGermanFranceFrançaisFrenchΕλλάδαΕλληνικάGreekItaliaItalianoItalianČeská republikaČeštinaCzechPolskaPolskiPolishСрбиjаСрпскиSerbianLatvijaLatviešuLatvianLietuvaLietuviųLithuanianMoldovaMoldoveneascăMoldavianБеларусьБеларускiBelarusian
Transcaucasia
ԱրմենիաՀայերենArmenianАҧсныАҧсышәалаAbkhazХуссар ИрыстонИронауОssetianსაქართველოქართულიGeorgianAzərbaycanАzərbaycancaAzerbaijani
Middle East
Sputnik عربيArabicArabicTürkiyeTürkçeTurkishSputnik ایرانPersianPersianSputnik افغانستانDariDari
Central Asia
ҚазақстанҚазақ тіліKazakhКыргызстанКыргызчаKyrgyzOʻzbekistonЎзбекчаUzbekТоҷикистонТоҷикӣTajik
East & Southeast Asia
Việt NamTiếng ViệtVietnamese日本日本語Japanese中国中文Chinese
South America
BrasilPortuguêsPortuguese
NewsfeedBreaking
01:10 GMTBiden, First Lady Spotted Maskless at Italian Restaurant in DC
01:06 GMTGodsent: US Senator Praises the Lord for Bitcoin After Lawmakers Approve Debt Ceiling Raise
00:36 GMTMajor Evacuation Flight Departs Kabul For Qatar With Over 350 People on Board - Reports
00:05 GMTIsrael Anticipates Up to 2,500 Rockets Fired Daily in Case of War With Hezbollah - Report
YesterdayThree Dead in Knife Incident in Arkansas, Police Say
YesterdayUS Coast Guard Investigating Container Ship Suspected in California Oil Spill
YesterdayVenezuelan Government Says Talks With Opposition Halted Over Saab’s Extradition to US
YesterdayCleaner Queen: Buckingham Palace Looks for Daily Janitor With 'Good Time Management Skills'
YesterdayTexas' Abbott Says Biden's 'Catastrophic Border Policies' Abandoned Citizens Near Border
YesterdayTransportation Secretary Buttigieg Defends Taking Parental Leave Amid Supply-Chain Crisis
YesterdayCollege Professor's Car Stolen During Lecture on Crime in Albuquerque - Report
YesterdayChinese Army Newspaper Urges 'People's War' Against CIA Infiltration
YesterdayOnly In for Illegal Aliens? Dems Refuse to Admit 80,000 Qualified Workers Without Immigration Reform
YesterdayVideo: Pennsylvania Mall on Lockdown After Shots Fired, 'Several' People Injured - Reports
Yesterday'Just Stop & Do No Harm': Why Biden's $3.5 Trillion Bill Will Hurt US Economy for Generations
YesterdayNetizens Sceptical Over Results of Joe Biden’s Physical Test as WH Says POTUS to Be Examined 'Soon'
YesterdayFamily of Murdered MP Sir David Amess Thank Well-Wishers for Tributes
YesterdayEx-US Air Force Captain Says UFOs Are Alien and Want to Send Message to Humans About Nuclear Weapons
YesterdayRussia’s Team Spirit Wins The International Dota 2 Championship for First Time
YesterdayIsraeli Prime Minister Says Iran Brings Violence, Instability to 'Every Place It Goes'