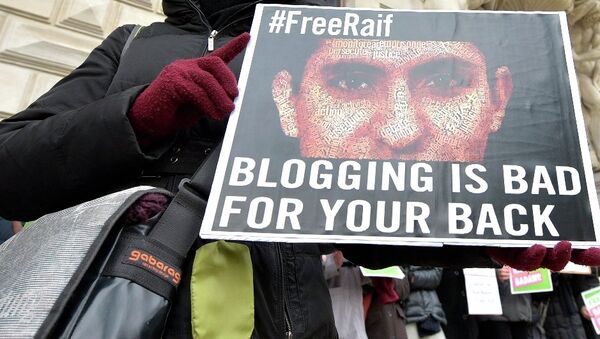 © AP Photo
Subscribe
There has been international outcry following news that a Saudi blogger - sentenced to 10 years in prison and 1,000 lashes on charges of insulting Islam - has had his punishment upheld, with criticism of the British government's perceived soft touch in condemning officials in Riyadh.

Saudi Arabia's supreme court upheld the sentence against blogger Raif Badawi, according to his wife, meaning the decision and sentence cannot be overturned.

"This is a final decision that is irrevocable," Badawi's wife, Ensaf Haidar, told AFP in an interview from Canada on Sunday, where she lives with the couple's children.

"This decision has shocked me."

Badawi received the first of his 1,000 lashes outside a mosque in the city of Jeddah in January, sparking international outrage and human rights concerns.

Subsequent rounds of more lashes have been postponed due to medical advice and concerns over Badawi's welfare.

Amnesty International have been one of the organizations leading the international condemnation, criticizing the decision to uphold Badawi's "cruel and unjust" sentence as "abhorrent."

"Blogging is not a crime and Raif Badawi is being punished merely for daring to exercise his right to freedom of expression," Philip Luther, Director of Amnesty International's Middle East and North Africa Programme said.

Raif Badawi's being tortured in Saudi Arabia. His crime: writing. His family's in Canada. Cdn govt must act #cdnpoli pic.twitter.com/yGMiqmVUpE

There are now fears Badawi's flogging may resume following the supreme court's decision, with the 31-year-old's wife concerned it may happen as early as next week.

"I was optimistic that the advent of Ramadan and the arrival of a new king would bring a pardon for the prisoners of conscience, including my husband," she said.

Your Majesty, @KingSalman I politely request you release @raif_badawi for the sake of humanity. The world will wait & watch you. #FreeRaif

Along with Badawi, his lawyer and fellow activist Waleed Abul-Khair is also serving a 15-year sentence for insulting the country's judiciary and other charges relating to his political activism.

While there was a chorus of international outrage following Badawi's arrest, sentence and first flogging, activists have criticized the British government for their seemingly soft criticism of the Saudi government.

Various media campaigns, such as the Twitter hashtag #backlash, which saw people draw pictures of lashes on their backs with lipstick, was aimed to raise awareness and support for Badawi's case, while a number of governments, including the US, Canada, Germany and Sweden have previously condemned Saudi Arabia over the case.

Riyadh hit back at the criticism of its actions though, as officials said they "strongly denounced the media campaign around the case," with Saudi Arabia's ambassador to Canada, Naif Bin Bandar al-Sudairi, officially complaining about the criticism the kingdom had received in a letter to the Canadian government.

"The kingdom does not accept any form of interference in its internal affairs and rejects… the attack on the independence of its justice system," he wrote.

Despite other western nations publicly denouncing the sentence, British officials have been accused of being too timid in their reactions, for fear of upsetting their traditional Saudi allies, with whom the UK shares many trade links.

The UK Foreign Office took to Twitter in January to express "concern" that Badawi had been flogged, before adding that the government "condemns [the] use of cruel and degrading punishment in all circumstances."

And although Prime Minister David Cameron took to the House of Commons to say relations with Saudi Arabia were being "continually reviewed," the lack of meaningful words and actions from London drew a harsh reaction from critics who accused the UK of "wearing the Saudi muzzle" due to Britain's various oil, business and strategic interests in the kingdom.

"Our ministers rightly celebrate free speech in Paris or in London but suddenly seem to lose their own power of utterance when it comes to forthrightly and publicly condemning the authorities in Riyadh," Amnesty International UK Director Kate Allen said.

"Why do ministers keep wearing the Saudi muzzle? It seriously weakens the UK's credibility if it's seen to tone everything down when it comes to oil-rich Saudi Arabia."

"David Cameron and his ministers should have the courage of their convictions and say — loud and clear — that Raif Badawi's case is an absolute disgrace."