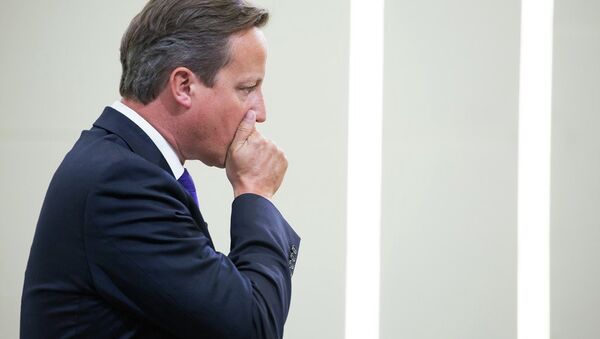 Cameron Says Ministers Must Support UK's EU Membership
MOSCOW (Sputnik) – On Sunday, Cameron pledged at the Group of Seven (G7) summit in Germany to renegotiate Britain's role in the European Union and cautioned members of the UK government to support the campaign for the country remaining in the bloc, if they want to retain their positions.

"David Cameron clearly wants to keep Britain inside the EU under any circumstances," Farage tweeted.

A separate tweet by the UKIP leader read "as the President of the European Commission [Jean-Claude Juncker] himself said, David Cameron's entire focus is on 'permanently docking' Britain inside the EU. "

On June 1, Juncker claimed that Cameron wanted to use an in-out referendum on Britain's EU membership to ensure the country will "permanently" be "docked" in the 28-member bloc, adding that a British exit from the union is unrealistic.

After winning the May 7 general election, Cameron pledged to revise Britain's relations with the European Union ahead of the referendum by reforming the system of contributions to the bloc's budget and granting broader powers to member-state governments to curb immigration.

In late May, the UK government presented a bill to Parliament on a referendum on the United Kingdom's membership of the European Union. The legislation would see a vote take place no later than December 31, 2017. A second hearing on the bill will be held on Tuesday.