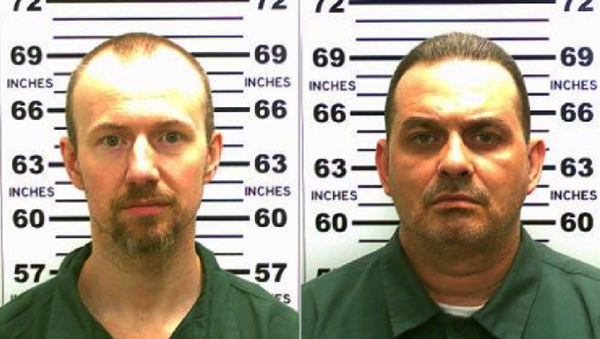 MOSCOW (Sputnik) — State Police launched a manhunt for Richard Matt, 48, and David Sweat, 34, who were discovered missing from the Clinton Correctional Facility during an early Saturday bed check. The two are considered "extremely" dangerous to the public.

New York State Governor Cuomo announced $100,000 award for any information that could lead to the capture of the prisoners on his Twitter microblog.

Today we announced $100,000 reward for information leading to the arrest of escaped inmates: http://t.co/wBLO7mU9aq pic.twitter.com/iPQSR2MVyV

Matt and Sweat escaped the facility in the small village of Dannemora in the state of New York, some 20 miles south of the Canadian border, through a series of elaborate tunnels with the use of power tools, according to officials.

New York Prisoners' Escape 'Elaborate, Sophisticated' - State Governor
Acting state corrections commissioner Anthony Annucci said in a press briefing a hole was discovered at the back of the inmates' cell. Their point of exit was a nearby manhole cover connected to the tunnels.

"This is a crisis situation for the state and these are dangerous men," Cuomo said in a separate post, calling on all residents to pass on any information available.

Over 200 local, state and federal police officers, including helicopters and K-9 units, are involved in the ongoing manhunt for the escapees, State Police Troop B Commander, Maj. Charles Guess, said at Saturday's conference.

Roadblocks had also been set up in the small Clinton County village, as officials pledged that "no stone will be left unturned" in the ongoing investigation.

Matt was serving a sentence of 25 years for kidnapping a man and beating him to death, while Sweat was convicted of first degree murder of a sheriff's deputy and was serving a life sentence without parole.