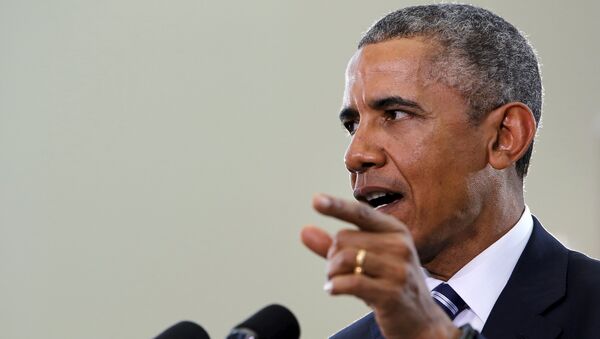 © REUTERS / Jonathan Ernst
Subscribe
International
India
Africa
US President Barack Obama said the conflict in Ukraine can be solved peacefully only if country’s territorial integrity and sovereignty is ensured.

WASHINGTON (Sputnik) — The conflict in Ukraine can be solved peacefully only if country’s territorial integrity and sovereignty is ensured, US President Barack Obama said Sunday.

OSCE Envoy to Ukraine Resigns Over Contact Group's Zero Negotiability
The meeting of the leaders of G7 states, comprising Canada, France, Germany, Italy, Japan, the United Kingdom and the United States, kicked off in Bavaria’s Schloss Elmau hotel on Sunday. Obama was scheduled to have a bilateral meeting with British Prime Minister David Cameron on the sidelines of the summit.

"We think that there can be a peaceful, diplomatic resolution to this problem, but it’s going to require that Europe, the United States and the Transatlantic Partnership, as well as the world, stay vigilant and stay focused on the importance of upholding the principles of territorial integrity and sovereignty," Obama said before the talks with Cameron, according to the White House press service.

The US president added that West should maintain anti-Russia sanctions to put pressure on Moscow and eastern Ukraine independence supporters to implement fully the Minsk agreement on Ukraine’s reconciliation.

The Ukrainian crisis escalated in April 2014 when Kiev launched a military operation to suppress the people of Donbass for refusing to recognize a coup-imposed government. The United States, the European Union and several other states accused Russia of fuelling the conflict and imposed sanctions.

Moscow denied these accusations and has taken an active part in international efforts aimed at finding a peaceful resolution to the conflict in Ukraine.