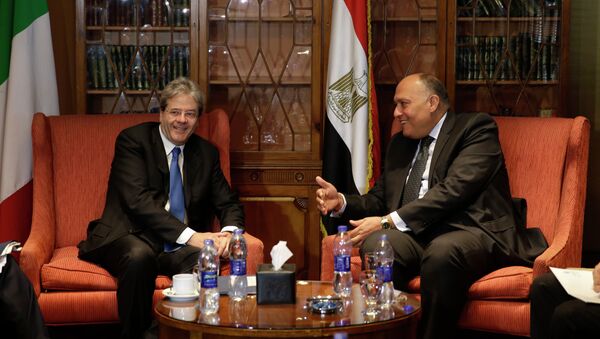 The foreign ministers of Egypt and Italy consider political reconciliation in Libya to be the first step in countering terrorism and organized crime in the Mediterranean region, the Egyptian Foreign Ministry spokesman said following Sunday's bilateral meeting of the top diplomats.

ISIL Makes Inroads in Libya Amid Country's Chaos
CAIRO (Sputnik) – Libya has been in a state of turmoil since early 2011 after the Arab Spring protests led to a civil war and the overthrow of long-time leader Muammar Gaddafi. The Libyan government is fighting numerous rebel groups, including Islamic State jinadist group-affiliated militants.

"Ministers noted that political and security development in Libya is a cause of common concern and make us want to facilitate the settlement and stabilization [in the country], which would result in a focus on the fight against terrorism and organized criminal groups," Badr Abdel-Atti said in a statement read.

Egyptian Foreign Minister Sameh Shoukry stressed the necessity of the UN participation in the political stabilization in Libya, according to the statement.

Italian Foreign Minister Paolo Gentiloni added the Libyan crisis may lead to the spread of terror activities in the neighboring countries as well as the Mediterranean amid the increasing illegal immigration.

The European Union has been struggling with an influx of undocumented migrants, as hundreds flee conflicts in North Africa and the Middle East via the Mediterranean Sea. The main stream of migrants now goes through Libya to Italy.

The meeting of Shoukry and Gentiloni took place ahead of trilateral ministerial talks between Egypt, Algeria and Italy on Libya, including political settlement of the crisis, terrorism and illegal immigration.