Russia Has Capabilities, Tactics to Threaten European Security – US General 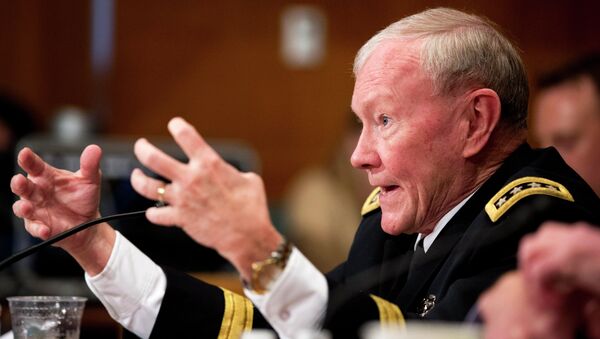 MOSCOW (Sputnik) – Russia owns a range of capabilities and tactics that threatens European security, US Joint Chiefs Chairman Gen. Martin Dempsey said in an interview with The Wall Street Journal.

"I can’t tell you, as we sit here today, precisely what [Russian President Vladimir] Putin and Russia intend to do… I can tell you on the capabilities side, they have developed some capabilities that do threaten security in Europe," Dempsey said in the interview published Saturday.

Dempsey said that Russia showed some capabilities with long-range aviation and nuclear forces that are clearly intended to signal the European Union and the United States of its readiness to consider all military instruments.

Moscow has also demonstrated the ability to effectively use propaganda, train and assist armed groups as well as conduct snap exercises with conventional forces that threaten EU borders.

"They own advantages in Europe – the advantages of time and geography," he added.

The remark came on the eve of the Group of Seven (G7) summit in Germany, whose agenda is highly dominated by relations with Russia and its alleged involvement in the Ukrainian conflict.

On Saturday, Putin said in an interview with Italy’s Il Corriere della Sera newspaper that only a mad person experiencing nightmares could picture the possibility of a war between Russia and NATO, adding that the relationship between Russia and the West should be based on cooperation, rather than confrontation.