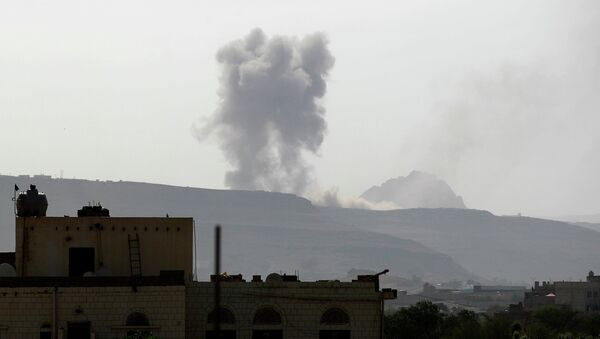 Saudi-led forces killed at least 44 people, including 20 civilians in bombing raids on the Yemeni capital on Saturday.

A Saudi-led bombing raid killed at least 44 people including 20 civilians after jets struck the country' armed forces headquarters in the capital, Sanaa.

According to Yemen's SABA news agency, the bombing destroyed several homes around the armed forces headquarters and injured over 100 people. On Saturday, the United Nations announced that peace talks between Yemen's Houthi militias and the ousted Saudi-backed government would take place on June 14.

"At least 20 civilians and 25 soldiers and officers were killed," a medic told Reuters.

UN to Hold Conference on Yemen Crisis Settlement in Geneva on June 14
The Saudi-led coalition mounted at least four raids against the area, burning buildings and forcing residents to flee, according to AFP. On Saturday, Saudi Arabia issued a statement claiming to intercept a Scud missile launched by Yemeni forces.

"The number of the casualties is on the rise because the air raids are continuing against the headquarters and other military positions in Sanaa," a health official told DPA news agency.

The UN-facilitated peace talks scheduled to take place on June 14 aim to bring an end to the conflict between Yemen's Houthi militias and the country's Saudi-backed ousted government. In March, a Saudi Arabia-led coalition began bombing Yemen following a request by its exiled president Mansour Hadi.