Obama Sets Out to Enforce Sanctions as Europe Wavers 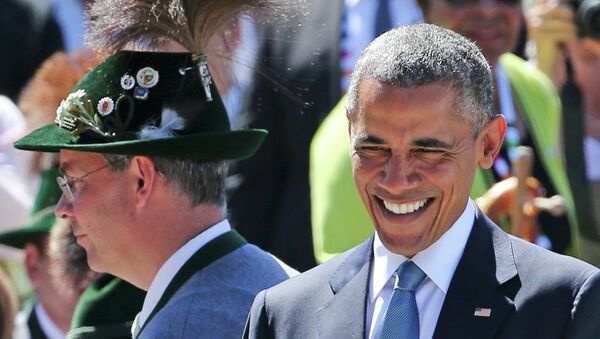 © REUTERS / Daniel Karmann/Pool
Subscribe
International
India
Africa
US President Barack Obama set out to enforce the EU's sanctions against Russia on Sunday, at a speech prior to the opening of the G7 summit in Germany.

At his opening speech prior to the Group of Seven (G7) summit, United States President Barack Obama reiterated his desire to enforce European sanctions against Russia.

Prior to the summit, German business interests including the German Engineering Association spoke out, saying that EU sanctions against Russia are hurting their business. According to German news magazine Der Spiegel, US companies have been ignoring sanctions, making deals with sanctioned Russian companies while German companies abide by them.

"Over the next two days we will discuss our short future, global economy that creates jobs and opportunities, maintaining strong and prosperous EU, new trade partnership across the Atlantic, standing up to Russian aggression in Ukraine, combating threats from violent extremism to climate change," Obama said.

Pentagon Admits Sanctions Against Russia Make No Sense
Russian President Vladimir Putin previously said that trade between Russia and the United States rose in 2014 while trade with EU countries declined amid sanctions.

A source close to EU leadership told RIA Novosti that there are no plans to expand sanctions against Russia in the preparations for prolonging existing measures.

EU President Donald Tusk earlier claimed that the only question is whether the EU will consider more sanctions against Russia.

"The same ones," the source told RIA Novosti, answering a question about whether to expect more sanctions while discussing their prolongation.

G7 members did not recognize a March 2014 referendum that saw the Black Sea peninsula of Crimea rejoin Russia from Ukraine.

Western leaders have also accused Russia of playing a role in the armed conflict that erupted in eastern Ukraine in April 2014, a claim denied by Russia.

Russia was suspended from the informal forum, then known as the G8, in March 2014.