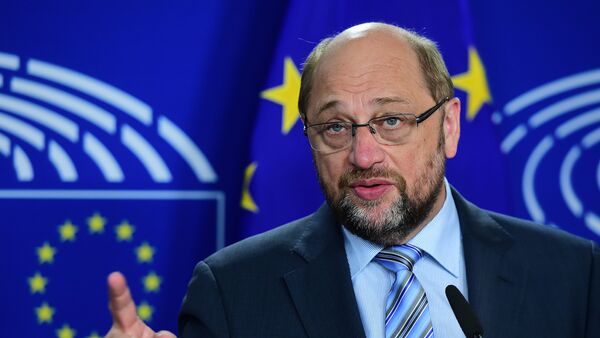 "The European Union is ready to meet the Greek government halfway," Schulz said, adding Athens must also bear responsibility for the Eurozone.

The unresolved debt stalemate between Greece and its creditors – the International Monetary Fund, the European Commission and the European Central Bank – is expected to weight on the G7 summit of world leaders which kicks off in Germany on Sunday.

Greek Bailout Deal to Occur Before IMF Repayment - Deputy Defense Minister
Relations between Athens and Brussels soured over the past months after the ruling Syriza party, which was elected in January to form the government, went along with its pre-election promises to end the painful austerity program and handed the bailout plan back to money lenders.

"The government in Greece must finally admit that they have a responsibility not only to the voters of their Syriza party but also to the entire country and, as part of the EU, to the Euro and Europe," Schulz stressed.

Greek Prime Minister Alexis Tsipras is going to meet with his key European creditors at an EU summit next week, in particular with the German and French leaders. He was reportedly due to Brussels for bailout talks on Friday. Instead, the premier opted to stay in Athens to brief the Greek parliament on the country’s debt policy and denounce creditors’ proposals.

Greece now has until the end of June to hammer out a bailout pact with international financial institutions before the current agreement runs out.

000000
Popular comments
greese should escape the eu monster, lets get our countrys back.
stevenrobertchurchill
7 June 2015, 08:12 GMT
000000
A bad toupee/hairpiece and a razor is all that separates this man from a notorious German leader. Well, that and a few thousand Panzer tanks. Ironically, with the exclusion of Britain, U.S. and France (the eternal turn-coats) the map of Europe today is similar to a WWII map (we've even got a bunch of Bolshy Germans including this one).