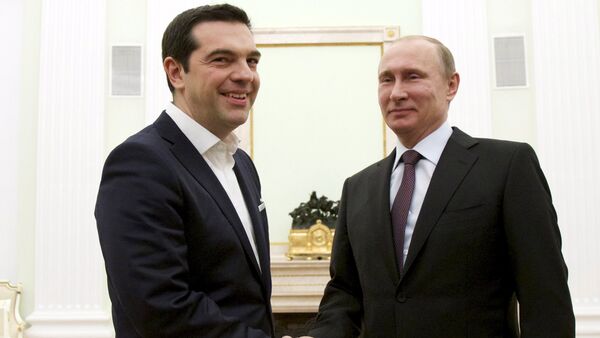 © AP Photo / Alexander Zemlianichenko, Pool
Subscribe
Greek Deputy Defense Minister Costas Isychos says that Putin and Tsipras are likely to hash out a deal to build a gas pipeline in Greece at their upcoming June meeting in St. Petersburg.

"It’s premature to say what will be signed but it’s for sure that the big talks that will take place [will] enhance the agreement already existing," he said.

Tsipras is due to attend the International Economic Forum in St. Petersburg on June 18-20 where he will meet with the Russian president to discuss a range of bilateral issues.

One of the key topics is likely to be the construction of a pipeline section to bring Russian natural gas to Greece and beyond.

Putin, Tsipras Discuss Construction of Gas Pipeline in Greece, Turkey
Russia has been promoting the Turkish Stream pipeline project to pump gas across the Black Sea to Turkey and Greece since last December, after its ambitious plan to build a pipeline, which was to make a landfall in Bulgaria, was dropped due to EU’s opposition.

On Friday, Putin and Tsipras discussed the progress on the pipeline pact in a phone conversation. Isychos did not rule out that Tsipras’ visit to Russia could see the deal finalized, but stressed it depended on what arrangements have already been made.

"I would not say that there won’t be a signing but I cannot there will be, because it’s not for sure yet what the talks would center on," he said. "Whether we will be ready to sign or not is a question of how the details of that agreement are being worked on on both sides."

The Turkish Stream is projected to have an annual capacity of some 63 billion cubic meters. The pipeline will end in a gas hub on the Turkish-Greek border, from where it is planned to continue to southern Europe.

At their previous meeting in April, Putin pointed out to Tsipras that Greece’s participation in the project could turn it into one of EU's key power distribution centers and help attract investment.