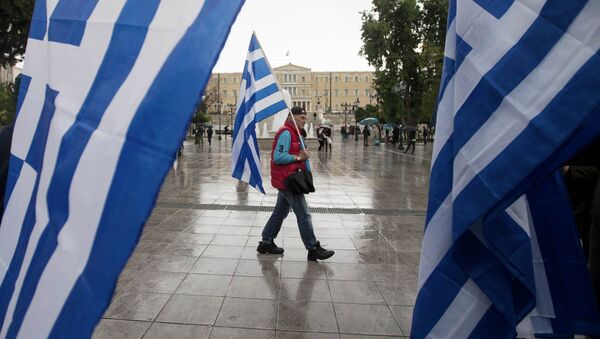 © REUTERS / Marko Djurica
Subscribe
International
India
Africa
Greece is among a number of Southern and Eastern European nations that remained committed to developing bilateral ties with Russia despite a sanctions regime currently in place and a general Cold War-era atmosphere.

"The Greek government has a standing position that sanctions will not help, they are not a tool to promote dialogue and cooperation between East and West regarding the Ukrainian crisis."

Greece to Benefit From Better Ties With Russia – Greek Energy Minister
Athens was estimated to have lost up to $4.5 billion since the spring of 2014, when the European Union along with the United States and their allies began imposing a series of financial restrictions on Moscow.

Western countries claim Russia is directly involved in the Ukrainian hostilities that have claimed over 6,400 lives to date. Russia, meanwhile, argues it is not a party to the conflict and urges a diplomatic resolution of the crisis.

"Mr. Tsipras still stands on that main issue: we are in disagreement with the sanctions. We call for the [termination] of sanctions," Kammenos' deputy told Sputnik on Saturday.

Kammenos responded that the "unbreakable bonds" of a common religion and economic ties unite the two countries.

US President Barack Obama is expected to advocate an extension of sanctions against Russia at a G7 summit due to start in Germany on Sunday. The European Union's set of measures targeted at Russia's economy expire on July 31.