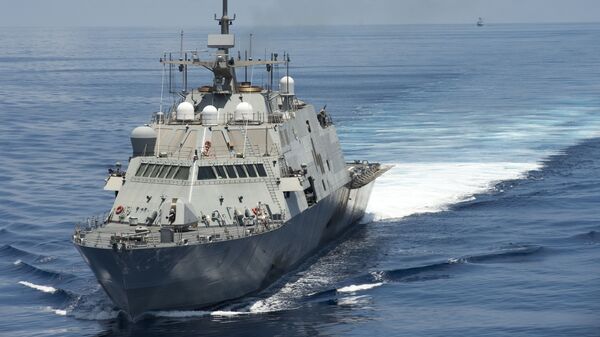 © Flickr / U.S. Pacific Fleet
Subscribe
International
India
Africa
The US is playing with fire by instigating a military standoff off Russian and Chinese borders, while neither the South China Sea nor Ukraine can be considered America’s backyards; Washington needs to understand that neither Russia nor China will accept its vassalage status, according to the Spanish newspaper La Vanguardia.

The bipolar world ended with the end of the Cold War, the US attempt of a unipolar world has ended up in fiasco, but what is now being suggested as true pluralism and consensus in international relations, is seen by the US as "uncertainty" and "danger", which must be ended by force, the newspaper correspondent Rafael Poch wrote in his blog.

US Seeks to 'Hold Russia Back' From Creation of Multipolar World
Washington is now committed to blocking the rise of two large nuclear-armed countries, the journalist says, echoing US economist and a columnist Paul Craig Roberts who served as an Assistant Secretary of the Treasury in the Reagan Administration.

To restrain Russia, the US has created the crisis in Ukraine.

China is now confronted with the Pivot to Asia and the construction of new US naval and air bases to ensure Washington’s control of the South China Sea, now defined as an area of American national interests.

It comes as ‘the next phase’ of the US rebalances to the Asia-Pacific.

As it is done with Russia, the bloggers explains, the US regularly resorts to the provocative practice of sending aircraft and warships on patrol just within the limits of the areas of its adversary, which generates constant tensions in the regions.

Washington however needs to understand that neither Russia nor China will yield to the US pressure and won’t accept the vassalage status prepared for them by the US, as did Europe, Canada, Australia, and Japan.