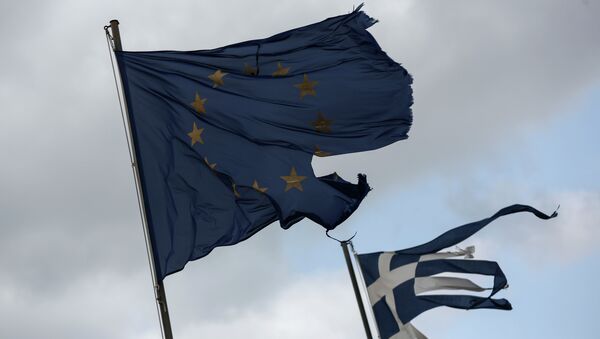 Putin said that speculation over Greece’s possible exit from the Eurozone amid the country’s massive debt could be harmful both to the European Union and the Greek economy.

MOSCOW (Sputnik) – Speculation over Greece’s possible exit from the Eurozone ("Grexit") amid the country’s massive debt could be harmful both to the European Union and the Greek economy, Russian President Vladimir Putin said in an interview with Italian newspaper Il Corriere della Sera ahead of his visit to Milan.

"We are developing relations with Greece regardless of whether it is a member of the EU, is part of the Eurozone or is a NATO member. We have very close historical partnership ties with Greece," Putin said, stressing that it is the "sovereign right" of the Greek people to decide on different alliance and zone memberships.

The Russian president added that it could be harmful to the Greek and EU economy to speculate on the future development of events in Greece.

Prime Minister Tsipras Warns Against Attempts to 'Punish' Greece
Greece was hard-hit by the global financial crisis of 2008-2009, leaving the country reliant on loans from international creditors, particularly the International Monetary Fund (IMF), the European Commission and the European Central Bank (ECB).

Greece and its three main lenders are currently negotiating a new debt relief deal as the current bailout program expires at the end of June.

Greece's anti-austerity Syriza party, which came to power following January elections, has promised to revise the country's bailout terms dictated by the lenders. The bailout standoff has created great uncertainty regarding Greece's future in the Eurozone.

The country’s outstanding national debt that emerged following the 2008 economic crisis is estimated at some $350 billion.