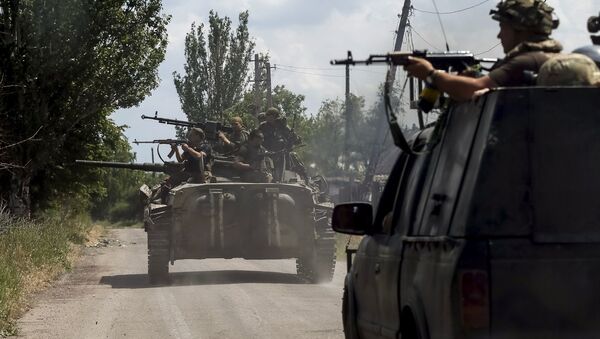 "I believe that this crisis was created deliberately and it is the result of our partner’s unprofessional actions," Putin said in an interview with Italian newspaper Il Corriere della Sera ahead of his visit to Milan.

The president added that the coverage of the situation surrounding Ukraine has been "absolutely unacceptable."

Kiev Warned OSCE on Return of Heavy Artillery to Front - Poroshenko
The West has been accusing Russia of meddling in Ukraine’s internal affairs and supporting independence fighters in the regions of Donetsk and Lugansk, where Kiev launched a special military operation in April, 2014. The United States and the European Union have also criticized Moscow over the reunification of Crimea with Russia in March, 2014.

Russia has repeatedly stressed that it is not involved in the situation in Ukraine, also pointing to the fact that 96 percent of Crimean residents voted for rejoining Russia at a referendum following a declaration of independence from Ukraine.

"I would like to emphasize once more: this was not our choice, we did not seek it, we are simply forced to respond to what is happening."

Russia has had to deal with a range of sanctions imposed against it by the West over the Ukrainian crisis. In response to the restrictive measures Russia has introduced a one-year food ban against countries that have introduced anti-Russia sanctions.

The Ukrainian crisis started in 2014 when pro-EU forces, including radical nationalists, backed by Western powers, ousted Ukrainian President Viktor Yanukovych after he did not sign an association agreement with the European Union.

Kremlin Schools Merkel Over Statement on 'Annexation of Crimea'
Following the appointment of new pro-Western and increasingly nationalist leadership in Kiev, it was proposed that the country join NATO in recent months, and drop its non-aligned status.

Russian President also said that concerns over a possible repetition of the Crimean scenario in the ongoing conflict in southeastern Ukraine (Donbass) are ungrounded because Crimea’s residents voted to rejoin Russia while people in the Donetsk and Lugansk regions opted for independence.

"The Crimean scenario does not reflect Russia’s position; it reflects the position of the people who live in Crimea," Putin said.

"All our actions…were aimed not at tearing away this territory from Ukraine but at giving the people living there an opportunity to express their opinion on how they want to live their lives."

Putin emphasized that, in contrast to Crimea residents, people in Ukraine’s Donetsk and Lugansk regions have demanded sovereignty from Ukraine as they refused to recognize the new Kiev government, which came to power as a result of a coup in February.

"And if somebody wants these territories to remain part of Ukraine, they should prove to those people that their lives would be better, more comfortable and safer within a unified state; that they would be able to provide for themselves and ensure their children’s future within this state."

Russia Shares UN Concerns Over New Escalation of Ukrainian Crisis
Donetsk and Lugansk residents held independence referendums in May, 2014. As a result, the self-proclaimed people’s republics of Donetsk and Lugansk (DPR and LPR) were established. DPR and LPR fighters have been countering attacks from Kiev forces, which launched a special military operation against residents of southeast Ukraine in April, 2014.

"But it is impossible to convince these people by means of weapons. These issues, issues of this kind can only be resolved by peaceful means," Putin stressed.

Putin noted that Russia is doing everything possible to influence independence supporters in Ukraine’s southeast in seeking a peaceful resolution of the Ukrainian conflict, and is calling on its EU and US partners to make the same effort in relation to Kiev.

"On our part, we take every effort, and will continue to do so, in order to influence the authorities of the unrecognized self-proclaimed Donetsk and Lugansk republics. But not everything depends on us. Our European and US partners should exert influence on the current Kiev administration. We do not have the power, as Europe and the United States do, to convince Kiev to carry out everything that was agreed on in Minsk."

Putin also stressed that the European Union could and should provide more substantial funds to crisis-hit Ukraine.

He described the situation in the contested Donbass region in eastern Ukraine as a "humanitarian disaster."

"Our European colleagues have taken on certain obligations, in particular they promised to help restore the banking system in these territories. Finally, since we are talking about what can or must be done, and by whom, I believe that the European Union could surely provide greater financial assistance to Ukraine," the Russian president stressed.

Poroshenko Rules Out Referendum on Donbass Secession
The deep political crisis in Ukraine has had a devastating impact on the country’s economy and finances, pushing the former Soviet republic to the brink of a default.

"The problem is that representatives of Kiev’s current authorities do not even want to sit at the same negotiating table with them [Donbass representatives]. And we can do nothing about that. Only our European and American partners can use their influence there. And it is unnecessary to threaten us with sanctions. We have nothing to do with this," Putin stressed.