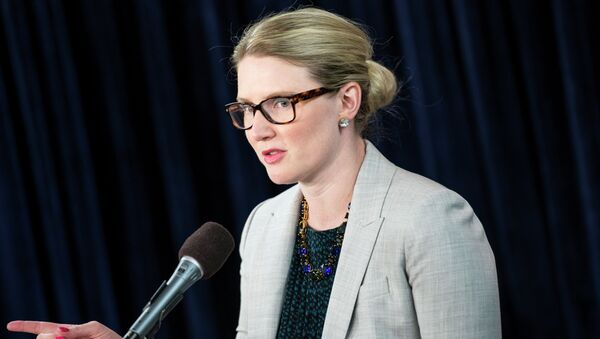 “It is hard to put an exact number given the Russian government actively tries to camouflage who they are sending in and weapons they are sending in. We know there is a large number of Russians there fighting with the separatists,” Harf said.

The spokesperson added that Washington is concerned about ongoing attack in the Donbass region.

Moscow Blasts Poroshenko's Claims About 'Russian Troops in Ukraine'
On Wednesday, the self-proclaimed Donetsk People’s Republic in eastern Ukraine said that Kiev forces had intensified shelling along the line of contact, while Kiev accused local militia of advancing toward its troops in the country’s east.

In an address to the Ukrainian parliament earlier on Thursday, Poroshenko reiterated claims over alleged presence of Russian 'tactical combat groups' in contested regions of eastern Ukraine, and stated that the threat of full-scale military activities in eastern Ukraine remains.

Kiev forces have been fighting independence supporters in Ukraine’s eastern regions since April 2014, with western countries blaming the unfolding of the conflict on Moscow.

In February, the warring sides agreed to a ceasefire in Minsk but since then consistent reports from both sides about truce violations have been released.

Russia has repeatedly denied any involvement in Ukraine’s internal matters and has been calling on diplomatic resolution of the crisis.