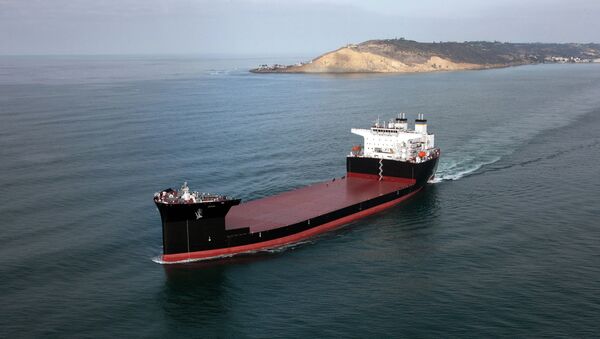 Known as Mobile Landing Platforms (MLP), the crafts are amphibious assault ships intended to partially submerge. Essentially, the ships look like normal transport vessels with a massive chunk missing from the center.

The submersion capabilities make them ideal for loading transport like heavy weaponry. While they’re not combat vehicles per se, the MLPs are intended to act as intermediaries between larger military ships and small landing craft.

When they’re done. The US Navy began construction in 2010, and though they’ve undergone successful test runs, the MLPs have yet to see service.

But apparently the Pentagon isn’t the only one interested in the technology. Photos leaked to the Beijing-based Sina Military Network last week show that China’s People’s Liberation Army Navy (PLAN) is building its own Mobile Landing Platforms.

According to the photos, the ship is approximately 180 meters long and 33 meters wide, weighing an estimated 5,000 tons. That makes it significantly smaller than the US Military Sealift Command’s Montford Point class, which measure 240 meters in length and stretch 50 meters across.

The ship is being constructed at the Wenchong shipyard in Guangzhou.

The PLA appears to also be constructing a new logistics support ship with roll-on, roll-off (ro-ro) capacity. Those ships make it easy to transport wheeled vehicles, which can then be rapidly deployed from the sea.

Given rising tensions in the South China Sea, both militaries could be rushing to get the ships up and running.