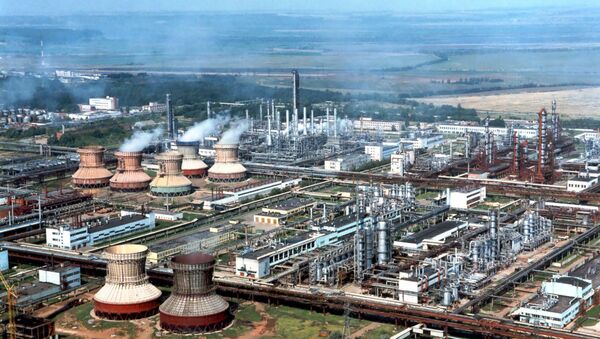 The course of the Russian government to increase domestic production of goods and services is expected to be a powerful incentive for the country's new industrial revolution. Swiss and German companies are willing to supply Russia with necessary machinery despite the fact that the latter have ‘political’ difficulties with German authorities.

To fulfill the idea of import substitution is for Russia like "winning the war", Neue Zürcher Zeitung wrote.

This is especially true when one takes into account Western sanctions and political instability in Europe, the newspaper argued.

Russia Able to Maintain Oil Production Levels Until 2035 Using Reserves
The Ukrainian crisis, the conflict with the West and anti-Russian sanctions forced the Kremlin to stake on domestic production of goods, rather than to import them from abroad. This, however, requires advanced machinery, 90% of which is imported from European countries. If Russia overcomes this dependence, one could say that it managed to "win the war," the article said.

By 2020, 18 branches of Russian industry are expected to become less dependent on imports. However, the author doubts that Russia will be able to achieve the goal in the short term due to a lack of qualified specialists, lagging in production and insufficient investments.

Investors Returning to Russia as Economy Far From Being 'Tattered'
At the same time, Swiss companies seem to be ready to supply Russia with the necessary equipment.  One could see it during the international exhibition "Metalloobrabotka-2015" in Moscow where representatives of Swiss enterprises were in search of new customers, the newspaper wrote.

German entrepreneurs were also present at the exhibition despite the fact the Federal Ministry of Economics denied support for their participation in the event this year. Since the beginning of the Ukrainian crisis and the EU sanctions, German companies have also experienced difficulties in receiving official export approvals.

Many of Russian companies are conglomerates working for the military and the civilian sector at the same time. The export of machinery, which could be theoretically used for military purposes, does not have much chance to get the official approval of German authorities, Neue Zürcher Zeitung wrote.