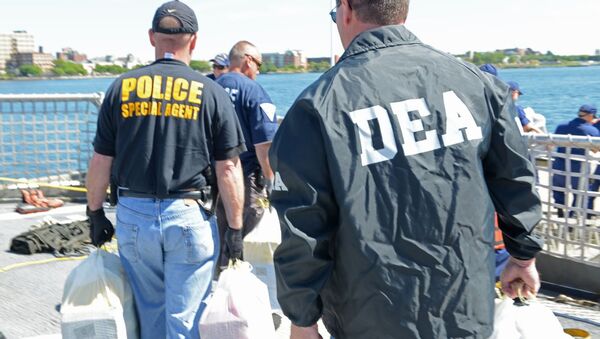 © Flickr / US Coast Guard photo by Petty Officer 2nd Class Rob Simpson
Subscribe
International
India
Africa
In all the uproar over the NSA’s surveillance program and the USA Freedom Act sold as a way to curb it, Americans may be overlooking another agency which routinely violates individual privacy. In the past decade, the DEA has gone around federal courts and tripled its electronic eavesdropping operations.

In the world of law enforcement surveillance, the collection of bulk metadata collection is a fairly modern technique. The more traditional way of invading a citizen’s privacy is through physical wiretaps, and no federal agency employs that method more frequently than the Drug Enforcement Administration.

Ten years ago, the DEA used wiretaps a documented total of 3,394 times. In fiscal year 2014, that number skyrocketed to 11,681, according to statistics from a Freedom of Information Act request conducted by USA Today.

Wiretaps are a critical tool in drug investigations, providing law enforcement agents with proof needed to prosecute suspected offenders. Given the wide array of communication options today – cell calls, landline calls, text messages, etc. – that total number was bound to increase. But any eavesdropping operation needs to be reviewed by both a senior Justice Department official and a federal court.

"That law exists to make sure that wiretap authority is not abused, that it’s only used when totally appropriate," Hanni Fakhoury, an attorney with the Electronic Frontier Foundation, told USA Today. "That’s a burden. And if there’s a way to get around that burden, the agents are going to try to get around it."

And that’s just what they’ve done. According to the Justice Department’s own records, over half of the wiretaps used in the last decade were approved by local prosecutors and lower state courts, most in New York and California.

According to current and former officials, the agency took their requests to judges they knew would give them less pushback.

DEA spokesman Joseph Moses said that agents were "making no attempt to circumvent federal legal standards and protections by instead pursuing state wiretap authorizations," but that high demand meant that some federal prosecutors "may be unable to support wire intercept investigations due to manpower or other resource considerations."

Rather than have their cases run into a brick wall, DEA agents seek approval from more accessible state authorities.

Still, while state courts are theoretically meant to abide by the same legal standards as federal judges, different states interpret those standards differently, essentially giving the DEA 50 different chances to get what they want.

"Within [the Justice Department], it was a rigorous standard," Stephen T’Kach, a former DOJ lawyer, told USA Today. "In the states, you have 50 different standards for what’s going to be enough."