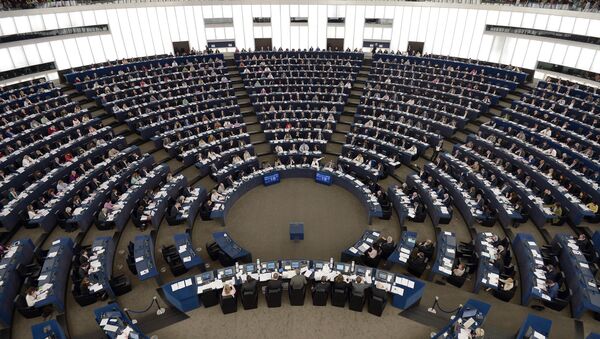 Russian Envoy to EU Reveals Details of European Parliament Restrictions
On Wednesday, members of the Ukrainian Human Rights Commission (UHRC) presented a book called "Undeclared War in the Heart of Europe" at the European Parliament headquarters in Brussels. UHRC representatives talked about numerous violations of human rights and freedom of speech by Kiev forces.

"Here, in the European Parliament, we are in the midst of intense anti-Russian propaganda, so it is difficult to have exact information about what is going on [in Ukraine]," Epitideios said.

He added that the information, provided by the UHRC about the actual situation in Ukraine might change the point of view of European lawmakers concerning the ongoing conflict.

Fighting between government forces and independence supporters in the eastern Ukrainian regions of Donetsk and Luhansk, which started in April 2014, persists despite several rounds of peace talks.

According to UN estimates, more than 6,400 people have been killed and over 1.2 million internally displaced in eastern Ukraine since April 2014.