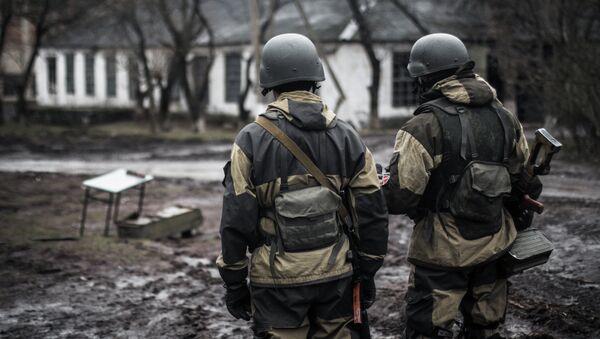 © Sputnik / Dan Levy
/
Go to the photo bank
Subscribe
The militia of the self-proclaimed Donetsk People's Republic lost a total of 100 soldiers, including 14 killed and 86 wounded, during Wednesday clashes with Kiev-led forces in eastern Ukraine, the DPR military spokesman said.

DONETSK (Sputnik) — Fresh clashes flared along the separation line near the city of Donetsk early on Wednesday, with both side of the conflict accusing one another of provocation and violation of Minsk peace accords.

"As to DPR army casualties, the current count stands at 14 killed and 86 wounded, including 18 in serious condition," Eduard Basurin said at a daily news briefing in Donetsk.

Basurin denied that DPR militia had gone on the offensive, stressing that any actions, which could lead to a full-scale war, were unacceptable.