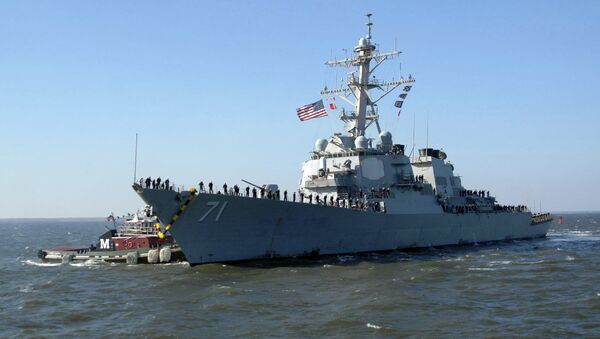 © Flickr / Official U.S. Navy Page
Subscribe
International
India
Africa
The USS Ross guided-missile destroyer left the Black Sea on Wednesday after a mission to demonstrate NATO's presence in the area, the US Sixth Fleet said in a statement.

"Ross’ time in the Black Sea was eventful, and the benefit from working with our partners and NATO allies in the region cannot be understated."

The Arleigh-Burke class destroyer entered the sea on May 21 in support of the so-called Operation Atlantic Resolve. The operation is designed to reassure US allies of Washington's support amid alleged "Russian intervention in Ukraine," something denied by Moscow.

Russia
US Navy Releases Videos of Su-24 Flying Near USS Ross
The US Sixth Fleet said in the statement that the USS Ross’ presence in the area was aimed at strengthening the collective security of NATO allies, and promoting peace and stability in the region.

On Monday and Tuesday, the US warship conducted joint drills with the Ukrainian Navy frigate, the Hetman Sahaidachny. Last year, Ukraine scrapped its neutral status to pave the way for NATO membership, but the military bloc’s chief said the East European nation needed to meet NATO criteria before it could join.

Russia regards NATO’s presence close to its western borders as a security threat. Russia’s envoy to NATO said in May that the country would bolster its defense capabilities in the Black Sea peninsula of Crimea to offset the bloc’s continued military buildup.