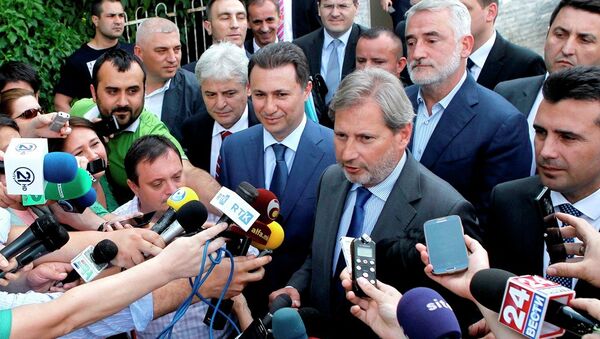 EU enlargement commissioner Johannes Hahn has called for early elections overseen by the EU in an effort to resolve the deep political crisis between the government and opposition in Macedonia over claims of mass surveillance and election fraud.

The Fifth Column: Western NGOs Accused of Financing Macedonian Uprising
After Hahn met Macedonian Prime Minister Nikola Gruevski he said: "It was agreed that by the end of April next year, there should be early elections, but it is important to prepare the country. It is about sound electoral codes, it is about a revised voting list, it is about respecting the rights of minorities.

"It will be furthermore important to accept all the recommendations being given by the European Commission when it comes to the independence of the judiciary. We have agreed to apply the methodology usually used when we negotiate the chapters 23 and 24. Also, we have yet no negotiations, but it is about rule of law, independence of justice, freedom of media etc." said Hahn.

Read my statement following my meeting with political leaders in #Skopje http://t.co/yGoXZTKrjH

Gruevski has been hit with a series of accusations against him and his ministers contained in taped conversations that appear to expose tight government control over journalists, judges and the conduct of elections.

The opposition accuses Gruevski of orchestrating the surveillance of over 20,000 people and is demanding his resignation. Gruevski says the wire taps, indicating election fraud and abuse of the justice system, were "created” by unnamed foreign intelligence services, doctored and drip-fed to the opposition parties since February in an effort to destabilize the country.

Commissioner Hahn said further talks would be held in Brussels next week to reach "final deal, a final agreement, which allows the country to head on, and to use this current crisis as an opportunity to modernize the country, to lead it into the future."

There are growing calls for Gruevski to resign and anti-government protesters have set up dozens of tents in front of his government office, saying they will stay until he steps down.