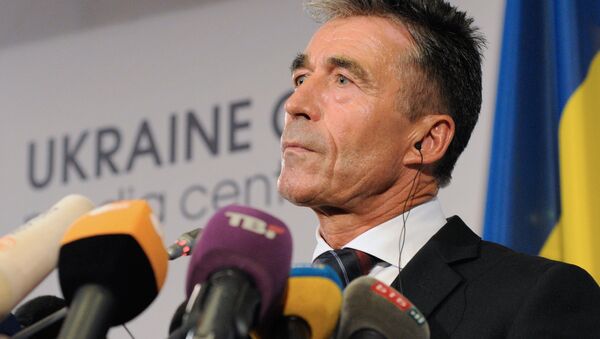 NATO nations should consider arming the Ukrainian government with “defensive” military weapons to counter the perceived threat of Russia in the ongoing conflict in eastern Ukraine, according to former NATO Secretary General Anders Fogh Rasmussen.

You Can’t Always Get What NATO Wants
With the ceasefire in Ukraine being violated on a daily basis and heavy fighting continuing in many areas, Rasmussen told BBC Radio 4 that the delivery of weapons to Kiev, along with other forms of aid, should be seriously considered to bolster the resources of the country’s armed forces, who are currently locked in fighting with separatist groups in the east.

"I think the West should step up support for Ukraine, first and foremost when it comes to the economy, but I also have to say that we have reached the stage now where individual nations should consider the delivery of defensive weapons to the Ukrainians to make them more capable."

However, when questioned about the use of ‘defensive’ military aid, the former NATO boss couldn’t guarantee that the suggested delivery of weapons wouldn’t be used for offensive military campaigns.

"Sometimes an offensive action is the best defense. Of course it’s a big blur."

Despite pushing for the bolstering of Kiev government forces, Rasmussen said that it wasn’t "an ideal option", arguing that such moves "could be misused by Russia as a pretext for further military engagement".

#Lavrov: We have discussed the situation in #Ukraine and have confirmed that there is no alternative to implementing the Minsk Agreements

Rasmussen, whose term as NATO secretary general finished in September last year, accused Russia of destabilizing Ukraine by sending troops into the country to fight alongside separatist groups.

"We do know that Russian troops are operating actively within Ukraine. We do know that the Russians have amassed tens of thousands of troops along the Ukrainian border and they have prepared training camps, so everything is ready for more offensive actions, and in that case I think [the] time has come to consider such delivery of defensive weapons."

Moscow has vehemently denied such accusations however, and has countered the claims by accusing NATO of engaging in inflammatory and aggressive expansion policies through their building up of eastern European military bases.

There are also fears that any further build-up of arms would seriously put the safety of many Ukrainian civilians at risk and lead to a continuation of the conflict.

Responding to earlier calls from Ukrainian President Petro Poroshenko for the US to arm Kiev, Russia’s Foreign Ministry said any such actions — which have been further backed up by Rasmussen — would "explode the whole situation" in eastern Ukraine and would be a "major blow" to the Minsk agreements that were negotiated to try and stop the conflict in the Donbass region.

Despite Moscow’s statement, Rasmussen rebuffed the idea that increasing NATO’s armed presence in eastern Ukraine would inflame the already tense situation, and said he could not understand how any potential arming of Kiev could be interpreted as aggressive by Russia.