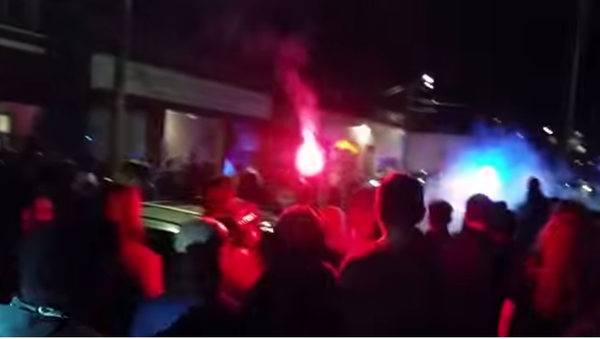 A pro-police neo-nazi protest Saturday night in Olympia turned into an intense street brawl with baseball bats, tear gas, and flying chairs, after anti-fascists arrived to declare that #BlackLivesMatter.

The protest, organized by members of the racist hate forum Stormfront, drew fewer than ten supporters, while over 150 counter protesters showed up to greet them.  When the two groups met, a street fight immediately broke out.

The neo-nazi white supremacists had talked a big game prior to their protest, with one of the organizers posting to their website that the people of the Black Lives Matter movement are weak and useless.

“Their arguments are weak. They have no valid points. They are inarticulate, cowardly, and moronic. They are hypocritical and aimless. We are stronger than they are, even with only half their numbers they were too afraid to act on all their disgusting threats of violence and murder,” an organizer wrote. “Stand and be counted, the enemy is broken and useless, our time to retake our homeland is nigh.”

But their opposition wasn’t as weak as they expected on Saturday night, when the white supremacists were chased down as they attempted to flee, and had their truck windows smashed with chairs.

“Pepper spray was fired in both directions.  Somebody let off a fire extinguisher at Manny.  He appeared to think it was pepper spray because it seemed to faze him for a moment.  The skinhead with the American flag hit a girl that was charging him with the flagstaff.  Another girl in black, who was masked up, struck a guy with a golf club she had attached a black flag to.  People were exchanging blows everywhere.  A brick flew over from the Nazi’s direction. Rocks and bottles were flying both ways and glass could be heard shattering as the bottles impacted.

About that instant, the Nazis broke and ran, with most the crowd from the protest in hot pursuit.  While all of this was going on the cops were cruising on both side of the melee in their SUVs.  It appeared they would surround the crowd, but instead they faded off to the east and west.  The Nazis made it to the end of Jefferson where they were parked, and piled into a white truck, some of them leaping into the back as the truck was already roaring away.  People were all around them smashing the windows out and bashing bodywork.  Someone yelled, ‘They are smashing the hell out of that truck,’ and laughed. The truck screamed away to the east, the crowd shouting, ‘Black lives matter!’ as the Nazis fled into the night,” an attendee of the demonstration wrote on OlyDocuments.

Read the Racist Emails That Cost Three Ferguson Officials Their Jobs
After chasing the skinheads off the street, the crowd of anti-facists and members of the Black Lives Matter movement continued to march through the streets until early Sunday morning.

No arrests were made at the protest.