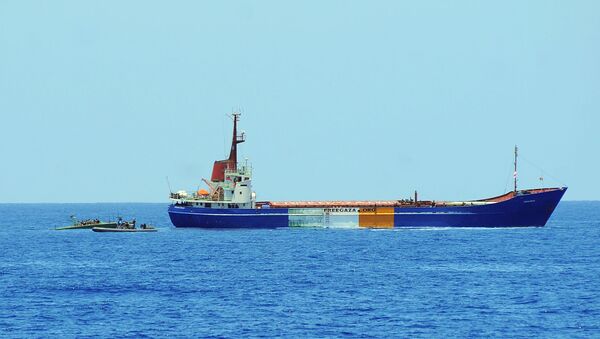 © Photo : Press office of Israeli Defense Force (IDF)
Subscribe
The co-organizers of the so-called Flotillas of Freedom hope Israel would not breach international law this time.

MOSCOW (Sputnik) — A member of the Humanitarian Relief Foundation (IHH), that co-organizes the so-called Flotillas of Freedom to deliver humanitarian aid to Gaza told Sputnik Turkey that she hopes Israel would not breach international law this time.

Since 2010, ships from a number of countries have made two unsuccessful attempts to break the naval blockade of the Gaza strip by Israel.

"Israel will try to stop us and even capture people. But we really hope that the Israeli authorities will at least observe the international law if are going to capture people," Gulden Sonmez, the chairwoman of the IHH Commission on Human Rights and the Law, said.

Sweden Cannot Sue Israel Over Attacks Against Gaza Aid Flotilla: Prosecutor
She reminded that in 2010, Israeli forces attacked the Flotilla of Freedom, as a result of which 10 people died, nine of them Turkish citizens and one US national.

Sonmez said the third flotilla was set up in order to highlight the blockade of Gaza, which she called unlawful.

Vessels from Greece, Norway, Italy, Canada, South Africa, Spain and Turkey, united under the aegis of the Freedom Flotilla Coalition, comprise the third Flotilla of Freedom. The convoy is expected to approach the Gaza shores in late June.

Israel imposed its blockade on Gaza in 2006 after an Israeli soldier was captured by Hamas militants. The blockade was strengthened in 2007, when Hamas took control of Gaza.