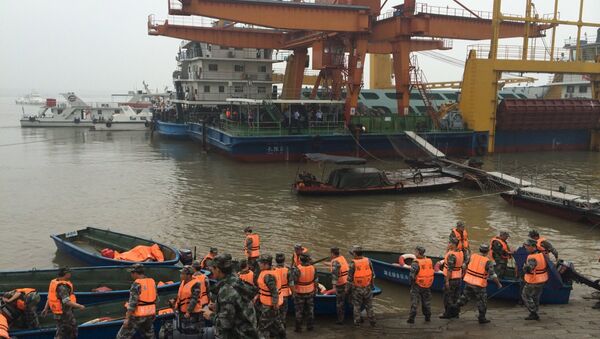 The captain and chief engineer of the Chinese that sank Monday night in the Yangtze river have been detained by police for questioning.

MOSCOW (Sputnik) — The captain and chief engineer of the Chinese Dongfangzhixing (Eastern Star) ship that sank Monday night in the Yangtze river have been detained by police Tuesday for questioning, CCTV channel reported.

Rescuers Say People May Be Trapped Inside Sunken Chinese Ship
Earlier on Tuesday Chinese media reported that the ship travelling from Nanjing, the capital of Jiangsu province, to the south-western city of Chongqing, sank at about 9:30 p.m. local time (GMT 13:30) Monday after being caught in a cyclone.

The ship had more than 450 people aboard: according to Xinhua, it was carrying 405 passengers, five travel agency workers and 47 crew members. According to CCTV, most of the passengers are aged 50 to 80.

According to the local media, 12 to 20 people have been rescued. One person was confirmed dead.

Currently more than 1,000 rescuers and over 50 vessels are working on the scene. The Eastern Star has been found upturned and search teams reportedly hear sounds coming from within it.