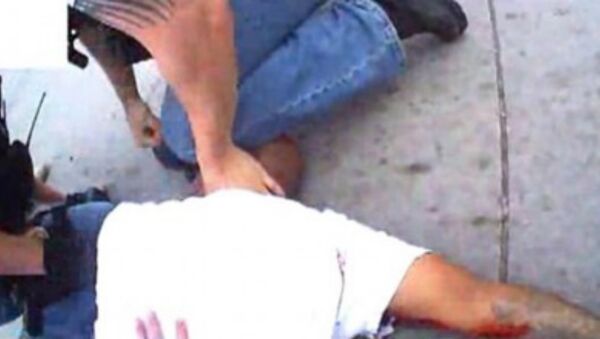 © youtube/TrendingNow
Subscribe
International
India
Africa
The Tulsa County Sheriff’s Department is under a state investigation following the fatal shooting of an unarmed man by a 73-year-old Reserve Deputy Robert Bates, who mistook his gun for his taser.

A formal inquiry was opened on Friday by the Oklahoma State Bureau of Investigation following the killing of Eric Harris on April 2, at the request of a special prosecutor assigned to the case.

Reserve Deputy Bates is an insurance company CEO who donated thousands of dollars, as well as weapons and vehicles, to the Tulsa Police Department in exchange for his unpaid position playing cop, which he assumed without proper training.  He was also the campaign manager in Sheriff Stanley Glanz’ re-election campaign in 2012. He personally donated $2,500 to the campaign.

It has been reported that at least three of Bates’ supervisors were transferred after refusing to falsify Bates’ training records, and that the Maricopa County Sheriff’s Department, with which Bates claims to have had active shooter training, has denied he was ever in the class.

Bates has pleaded not guilty to second-degree manslaughter with a hearing set for July 2.  The volunteer deputy was released on bond and permitted to take a vacation to the Bahamas following his arrest.

"Whether intended or not, Mr. Bates' vacationing in the Bahamas at this time sends a message of apathy with respect to the shooting and Eric's life,"  Dan Smolen, a lawyer for the Harris family, told NBC. "At a time when we are still mourning the death of a loved one that he shot down in the street, Mr. Bates will be relaxing and enjoying his wealth and privilege."

In an interview with the Today Show, Bates publicly apologized to the family, describing it as the second, or possibly the first, worst thing to ever happen to him after being diagnosed with cancer.

"I rate this as number one on my list of things in my life that I regret," he said in the morning TV show interview.

Bates dismissed claims that supervisors at the department who refused to falsify his records were transferred to lower positions.

The shooting and its aftermath have turned the department upside-down, with two senior sheriff's officials resigning. The department’s chief spokesperson was fired at the end of May, and Captain Bill McKelvey has been placed on administrative leave.