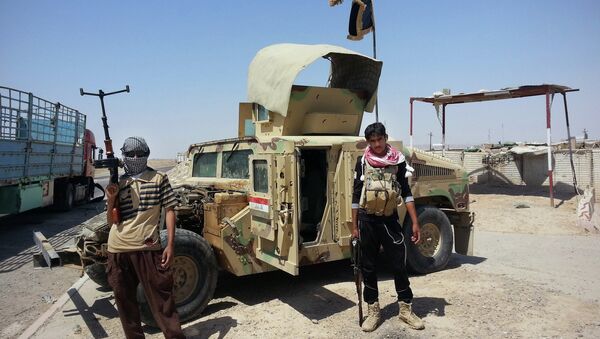 © AP Photo / File
Subscribe
Facing criticism from the Pentagon, Iraq’s prime minister announced government fighters have lost around 2,300 Humvees to the self-proclaimed Islamic State terror group. The vehicles were part of the hundreds of millions of dollars worth of equipment supplied to the country by the United States.

Prime Minister Haider al-Abadi’s revelation came in response to US Defense Secretary Ash Carter’s recent criticism of Iraq, claiming they had no will to fight against IS.

"They were not outnumbered. In fact, they vastly outnumbered the opposing force, and yet they failed to fight, they withdrew from the site, and that says to me, and I think to most of us, that we have an issue with the will of the Iraqis to fight ISIL (ISIS) and defend themselves," Carter said during an interview on CNN’s State of the Union.

The prime minister responded that they simply do not have the weaponry needed to take on IS, especially after the group took Mosul and many of their vehicles were lost, including tanks.  He did not clarify whether the items were destroyed or left behind for use by the extremist group.

The losses occurred during the retreat from Mosul, and Prime Minister al-Abadi said they are still losing more of the vehicles as fighting continues.

"We cannot replace HMMWVs we lose in battles," al-Abadi told Iraq state television on Saturday. "We lost 2,300 HMMWVs in Mosul alone. Besides, we are still losing HMMWVs because of the continuation of the fighting."

He continued on to blame the coalition led by the United States for not being able to arm everyone adequately, and not responding quickly enough after Baghdad requested assistance.

The cost of the vehicles varies depending on how they are equipped, but last year the State Department approved a potential sale of 1,000 vehicles outfitted with grenade launchers, armor, and machine guns to Iraq for $579 million, NBC reported.  This means the cost of the lost vehicles could easily clear a billion dollars.

As US troops left the country at the end of 2011, the military left behind a whopping $580 million in supplies. US Central Command has stated that they saved approximately $1.7 billion in shipping by leaving the items behind.