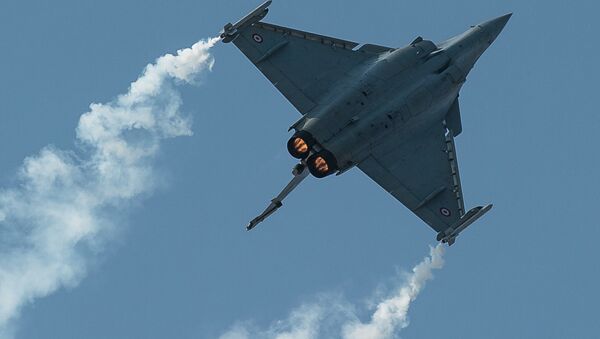 India confirms it will purchase just 36 Rafale fighter jets instead of 126, according to Indian Defense Minister Manohar Parrikar, who referred to the deal for 126 French warplanes as "economically unviable" and "way too expensive."

India May Buy Only Half of Planned French Rafale Fighter Jets
Indian Defense Minister Manohar Parrikar has announced that his country would buy only 36 Rafale fighter jets instead of the 126 previously suggested; he described the former government's plans to buy 126 French warplanes as "economically unviable and not required," media reports said.

"We are not buying the rest. We are only buying the direct 36," Parrikar was quoted by the Press Trust of India news agency as saying on Monday.

He said that buying more of Rafale jets may ride roughshod over the Defense Ministry's procurement budget.

The multi-billion-dollar deal for 126 Rafale fighters was, in fact, scrapped in April, when Indian Prime Minister Narendra Modi opted to buy 36 of these planes in a fly-away condition through a government-to-government deal.

French President Inks Rafale Sale Deal During Qatar Visit
The deal was scrapped more than three years after Dassault, the manufacturer of the Rafale fighters, was declared the lowest bidder under the United Progressive Alliance's tenure.

Parrikar has, meanwhile, said that a committee for nailing down the purchase of the 36 Rafale warplanes is due to complete its work in the next two to three months.

Parrikar's remarks came amid India's ongoing efforts to implement a large-scale defense modernization program estimated to be worth about 100 billion dollars; the goal is to try to rival its immediate neighbors, China and Pakistan.