Italy in Talks With UN on Ending Migrant Influx Via Mediterranean 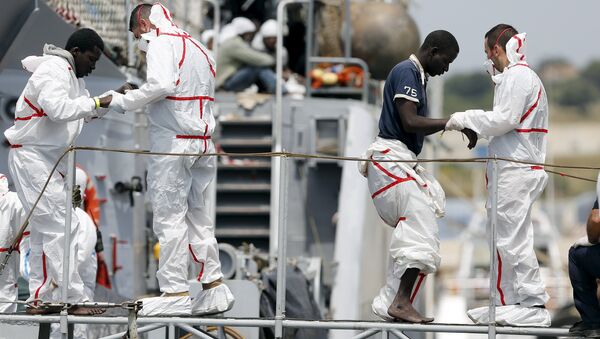 EU Ministers Shamed by Italy Into Facing Reality of Migrant Deaths
MOSCOW (Sputnik), Anastasia Levchenko – Italian authorities are discussing with the United Nations ways to end the uncontrolled influx of migrants to the country coming from across the Mediterranean, Italian Foreign Minister Paolo Gentiloni said Monday.

"It is a kind of slavery. We are discussing it on the UN level in order to put an end to it by carrying out an operation by Italian shores," Gentiloni said at a press conference after meeting with Russian Foreign Minister Sergei Lavrov, answering a Sputnik question.

The Italian minister stressed the importance of helping those refugees stranded at sea while attempting to cross the Mediterranean, but said the help must be provided to those headed to Europe legally.

He said it was necessary to distinguish between lawful migrants and people sent by those for whom it is business.

Thousands of people are attempting to cross the Mediterranean Sea as they flee violence in their home countries in North Africa and the Middle East.

According to UN estimates, some 60,000 people have tried to cross the Mediterranean in 2015, with more than 1,800 migrants dying in the attempt.