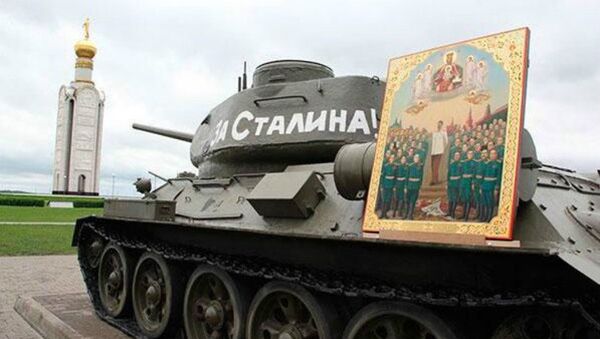 © Twitter / wayf44rer
Subscribe
Representatives of the Belgorod Archdiocese of the Russian Orthodox Church have issued a statement denouncing a painting created in the style of an Orthodox icon featuring Joseph Stalin and Soviet WW2 generals.

Earlier this week, people gathered at Prokhorovka field, the site of a key WW2 battle in Russia's Belgorod region, to hold a ceremony dedicated to the fallen, featuring the painting, entitled 'Sovereign Holy Mother', which shows Stalin and his marshals on Red Square under the gaze of Mary, the mother of Christ.

The painting was carried and transported by vehicles through the site of the battle, passing churches and monuments; a monk priest named Athonogenes prayed for the fallen heroes.

in Belgorod region in Russia a church service has been done with an icon of Joseph Stalin pic.twitter.com/T9gfwUjQBU

The Battle of Prokhorovka was one of the largest armored clashes in history, and part of the larger Battle of Kursk of July-August 1943, which broke the Nazi offensive and gave Soviet forces the strategic initiative for the rest of the war.

Commissioned by the Izborsk Club, a conservative think tank led by Russian literary figure and political commentator Alexander Prokhanov, the icon has raised controversy and led to debates about the appropriateness of depicting Stalin, who played an instrumental role in the destruction of the Church in the 1930s, in an icon. Prokhanov himself described the painting as a symbol of the "victory of light over darkness."

Responding to the controversy, the Archdiocese of the Belgorod region slammed the painting, saying that the image cannot be counted as an icon, and verges on blasphemy:

"Although the painting is done in the style of an icon, for many reasons, it cannot be considered as such. Firstly, none of the depicted historical personalities are counted as canonized saints by the Russian Orthodox Church. Secondly, some of those pictured in the painting were persecutors of the Church."

The Archdiocese suggested that the painting "serves as a manifesto and illustration of the idea of a 'civil religion', which is opposed to revealed religion and to the Orthodox Church."

Christ's Resurrection Celebrated by Orthodox Christians Around the World
Pointing out that monk priest Athenogenes is not a member of the Belgorod Archdiocese, the Church's statement also noted that participants in Thursday's celebrations did not appreciate the painting's presence, "expressing their confusion and frustration about the pseudo-religious views being imposed on them."

This is not the first time in post-Soviet Russian history that lone religious figures and believers have attempted to fuse images of Stalin with those of Orthodox Christianity. A scandal blew up in St. Petersburg in 2008 surround a painting entitled 'Matron and Stalin', featuring the controversial leader's alleged wartime meeting with the Blessed Eldress of Moscow, a canonized 20th century Orthodox Saint. The 'icon's' presence in a local church led to the dismissal of the priest who had hung it up, despite the priests' protestations that Stalin was a man of faith.

Stalin's relations with the Russian Orthodox Church were complicated. On the one hand, the leader was responsible for the terrible persecution and near-destruction of the Church as a social entity during the 1930s, with tens of thousands of priests, monks and nuns dismissed, imprisoned or killed, and many churches shut down, destroyed or converted into museums and warehouses. On the other hand, relations with the Church improved dramatically during the Second World War, when it was revived as a patriotic organization, a relationship which continued until Nikita Khrushchev launched another wave of persecution, this time less brutal.

000000
Popular comments
But Stalin, the one who transformed the churches into silo's, must be outraged as well!
mario828282
31 May 2015, 18:49 GMT
000000
The painting wasn't blessed, isn't venerated devotionally or liturgically, and doesn't depict anyone who is commemorated by the Church... so technically it isn't an icon. It is "only" a blasphemous stunt.

Mark Gewiss
28 December 2015, 09:13 GMT
000000
Newsfeed
0
New firstOld first
loader
LIVE
Заголовок открываемого материала
Access to the chat has been blocked for violating the rules . You will be able to participate again through:∞. If you do not agree with the blocking, please use the feedback form
The discussion is closed. You can participate in the discussion within 24 hours after the publication of the article.
To participate in the discussion
log in or register
loader
Chats
Заголовок открываемого материала
Worldwide
InternationalEnglishEnglishMundoEspañolSpanish
Europe
DeutschlandDeutschGermanFranceFrançaisFrenchΕλλάδαΕλληνικάGreekItaliaItalianoItalianČeská republikaČeštinaCzechPolskaPolskiPolishСрбиjаСрпскиSerbianLatvijaLatviešuLatvianLietuvaLietuviųLithuanianMoldovaMoldoveneascăMoldavianБеларусьБеларускiBelarusian
Transcaucasia
ԱրմենիաՀայերենArmenianАҧсныАҧсышәалаAbkhazХуссар ИрыстонИронауОssetianსაქართველოქართულიGeorgianAzərbaycanАzərbaycancaAzerbaijani
Middle East
Sputnik عربيArabicArabicTürkiyeTürkçeTurkishSputnik ایرانPersianPersianSputnik افغانستانDariDari
Central Asia
ҚазақстанҚазақ тіліKazakhКыргызстанКыргызчаKyrgyzOʻzbekistonЎзбекчаUzbekТоҷикистонТоҷикӣTajik
East & Southeast Asia
Việt NamTiếng ViệtVietnamese日本日本語Japanese中国中文Chinese
South America
BrasilPortuguêsPortuguese
NewsfeedBreaking
18:39 GMTEx-DC National Guard Official Slams Testimonies of Pentagon Generals on 6 January as Absolute Lies
18:23 GMTDems Growing Increasingly Concerned by Midterm Prospects as Biden Polling Numbers Drop
18:21 GMTWhite House Confirms US Will Not Send Representation to 2022 Winter Olympics in Beijing
17:32 GMTKorean Treat and Eurovision Winner Among Most Mispronounced Words of 2021
17:24 GMTWhitehall Union Claims Victory After Court Dismisses its Case Against Johnson and Patel
17:14 GMTPope Francis Stumbles on Airstair as He Boards Plane in Greece - Video
17:02 GMTTrump’s Social Media Listing Vehicle Says Under Inquiry From US Securities Investigators
16:47 GMTRussia, Egypt Start Naval Phase of 'Bridge of Friendship-2021' Drills in Mediterranean
16:40 GMTUS Reportedly Mulls Cutting Russia Off SWIFT, Sanctioning Energy Producers & 'Putin's Inner Circle'
16:37 GMTFinland’s PM Parties at Nightclub Until 4am After Contact With COVID-Positive Official
16:14 GMTSecond Week of Ghislaine Maxwell Sex Scandal Trial Kicks Off
15:56 GMTBoost for Britain! Is the UK’s COVID-19 Third Jab Campaign Saving Lives?
15:55 GMTWestminster Preparing 10-Year War on Drugs in Attempt to Defeat County Line Gangs
15:44 GMTIsrael Will Reportedly Push US to Strike Iranian Facility Amid Lack of Progress in Vienna Talks
15:41 GMTAmerica Unveils First-Ever Strategy to Battle Corruption at Home and Abroad
15:30 GMTChina May Build Military Base in Equatorial Guinea Amid Beijing’s Tensions With Washington
15:15 GMTKremlin: Putin Will Listen to Biden's Proposals on Ukraine 'With Great Interest'
15:15 GMTNYC to Use 'Preemptive Strike' Against Omicron With Vaccine Mandate for all Businesses, Mayor Says
15:08 GMT3,000 Security Officers Guard India's Mathura as Hindu Group Threatens to Install Idol in Mosque
14:59 GMTAmid Rumours of US Boycott of Beijing Olympics, How Could the Move Affect the Games?