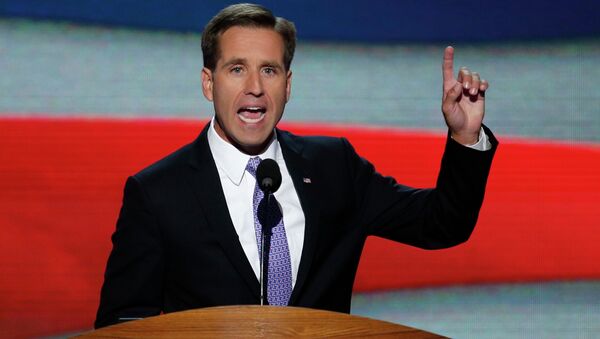 His son Beau served as the attorney general of the northeastern state of Delaware from 2006 to 2015 and intended to run for Governor in 2016. Previously, he served in the state's National Guard in 2003 and served a tour of duty in Iraq from 2008 to 2009.

"In the words of the Biden family: Beau Biden was, quite simply, the finest man any of us have ever known," the vice president said in a statement.

Beau Biden was first diagnosed with brain cancer in 2013. He died 10 days after being admitted to Walter Reed National Military Medical Center in Washington, DC on May 20.

President and First Lady Barack and Michelle Obama announced in a statement they were grieving and extended their condolences to Biden's family:

"Like his dad, Beau was a good, big-hearted, devoutly Catholic and deeply faithful man, who made a difference in the lives of all he touched – and he lives on in their hearts."

Other officials, including former state secretary and Democratic front-runner in the 2016 presidential election Hillary Clinton, expressed their condolences to Biden's family.

Joe Biden faced a family tragedy in December 1972, a month and a half after Biden's victory in the US Senate race. His first wife Neilia and daughter Naomi were killed in a car accident that injured his sons Beau and Hunter.

Beau Biden is survived by his wife Hallie and two children, Natalie and Hunter.